After release from mental hospital, man in yellow sundress steals school bus, then crashes front-end loader into his own home

Chelan County Sheriff Brian Burnett says that Washington’s new police reform laws, which went into effect Sunday, prevented deputies from chasing down Loudon while he was fleeing from police. 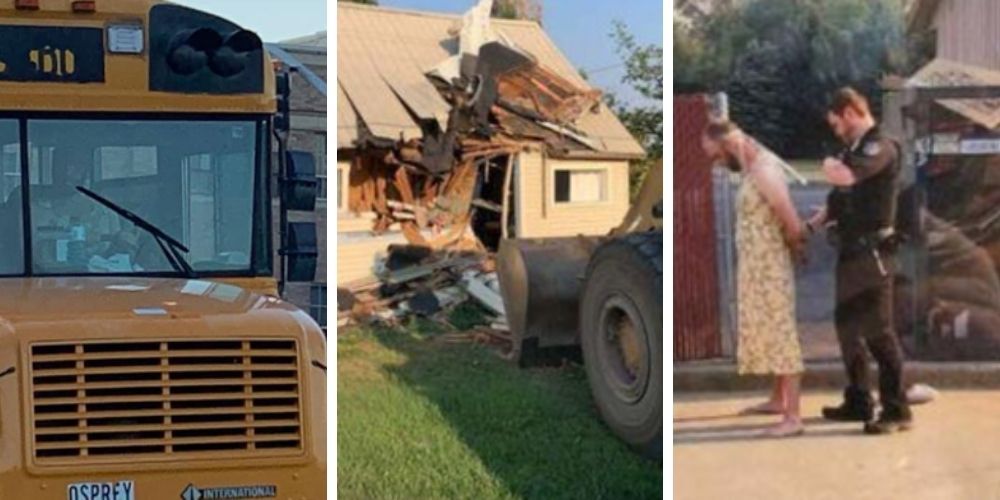 A man with a record of mental health issues was arrested Sunday for stealing a school bus and driving it across Washington state then stealing a front-end loader and crashing it into his own house in Chewelah.

Saturday morning, Andrew Loudon, 39, was released from Western State Hospital in Lakewood and made his way to Leavenworth over two and a half hours away. He then allegedly stole a yellow school bus, drove it an hour and 40 minutes to Moses Lake, then abandoned the vehicle.

He then hitchhiked through Spokane to Chewelah, where he stole a front-end loader and eventually crashed into his own home, while flipping a car into a nearby structure in the process.

Loudon’s estranged wife was in the house at the time but fled when she got word that he might be coming back.

Chelan County Sheriff Brian Burnett said that Washington’s new police reform laws, which went into effect Sunday, prevented deputies from chasing down Loudon while he was fleeing from police.

Burnett said the new police guidelines require deputies to only pursue a vehicle or suspect when:

Deputies tried to conduct a traffic stop of the bus near Monitor, but had to terminate the pursuit when Loudon ran a red light, allowing Loudon to continue driving across the state.

Pierce County Sheriff's Office (PCSO), forewarned about the exact circumstances in a statement regarding the new legislation.

"The largest impact for our residents will be the changes to our ability to pursue after a suspect who is fleeing in a vehicle. Law enforcement officers will only be able to engage in a pursuit if there is "probable cause" to arrest a person in the vehicle for committing a specified violent crime or sex offense such as murder, kidnapping, drive-by shootings, or rape."

Western State Hospital, which released Loudon, has had been criticized for ongoing physical assaults on patients and staff, patient escapes and staffing shortages. In 2018, after the hospital failed a safety inspection, the federal government pulled funding from the facility.

Loudon was arrested while wearing a yellow sundress and was charged with theft of a motor vehicle, possession of a stolen vehicle, first-degree domestic violence malicious mischief and attempting to evade police.