An open letter to Cyndi Lauper from Brandon Straka

When I read your response I couldn't help but feel flashbacks to times in my life when this same type of language was used against me and people like me, just for being gay. 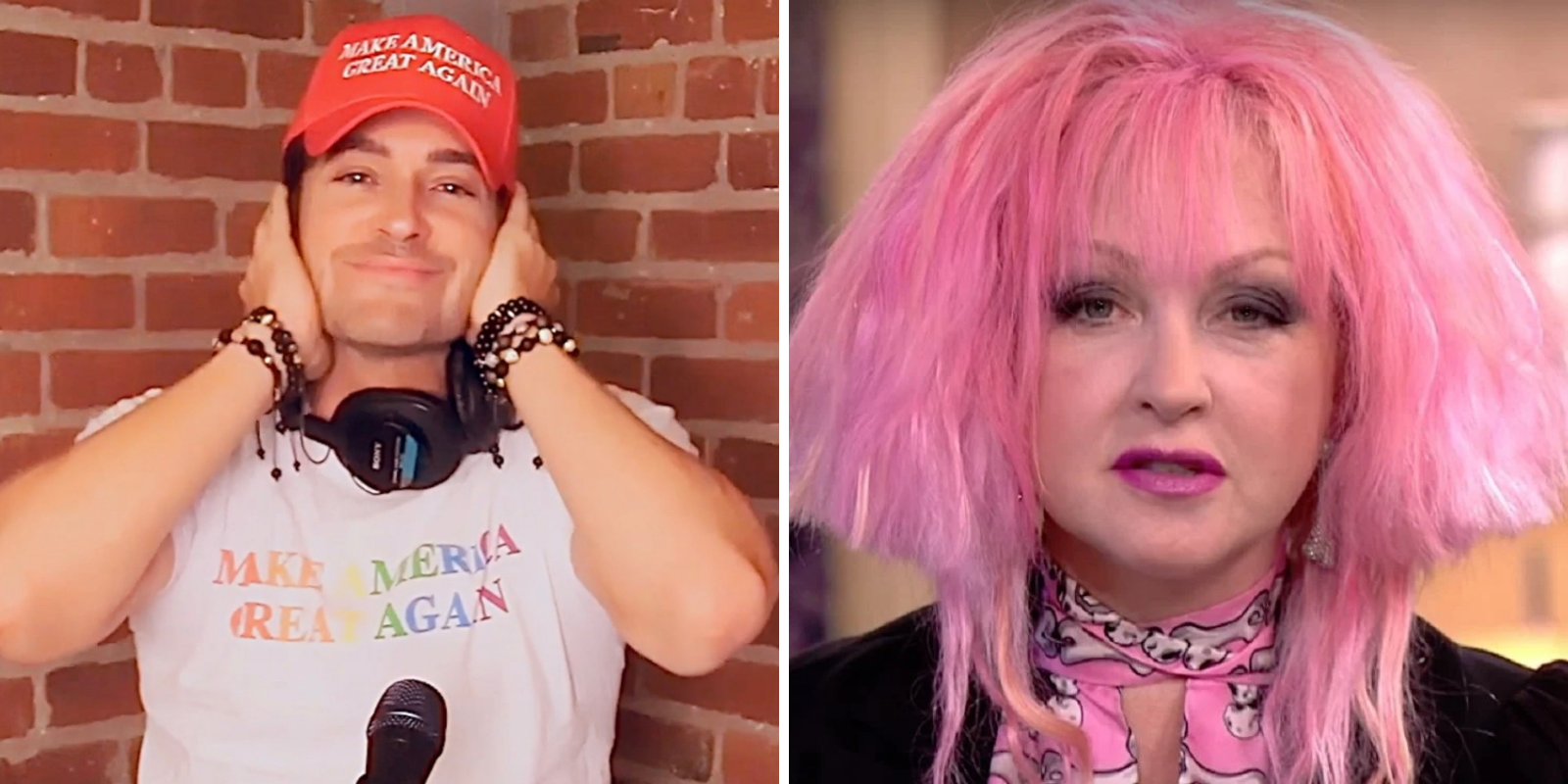 First, let me start by saying that I have nothing but respect and admiration for you and your incredible contributions to the world—both in terms of the amazing music you've given to all of us, and for your tireless advocacy and involvement in helping to make the lives of LGBT people better for so many decades.

I was raised on your outrageous, spirited, one-of-a-kind sound. "Girls Just Wanna Have Fun" was actually the first 45 I ever owned. And as a young kid who knew I was gay very early on in my life, I was inspired and moved by watching a mainstream pop singer take initiative to create housing for homeless LGBT kids, many of whom had been kicked out into the streets by unaccepting parents.

So, I hope I can explain to you how caught off guard I was to wake up recently and read that the musical legend Cyndi Lauper was upset with me.

My offense? Recording a cover of your hit song True Colors and an accompanying video which depicts the kindness and humanity of Trump supporters.

Oh...and doing all of this while being a gay Trump supporter, myself.

In the video, I highlighted the pain and strife many in our country have gone through this year with economic shutdowns, destruction of businesses from out of control rioting, and I showed kind-hearted Trump supporters cleaning up these communities and giving hugs to residents in neighborhoods that were destroyed... many of these residents are people of color.

I showed Trump supporters with black eyes and bloody faces, as they were attacked for daring to wear a shirt or a hat in public that said they want to make America great. I displayed the vast diversity of Trump supporters, something we never get to see in the mainstream media, by showcasing the faces of black, brown, white, LGBT, straight, old and young, who make up the beautiful MAGA family—all wearing their Make America Great Again hats.

I put the video, out and within days had millions of views on social platforms. The feedback was overwhelming. Thousands of comments from people across the nation saying the video made them cry tears of happiness, hope, pride, and sadness for a country so divided.

I thought I had created something beautiful.

Then, stories began coming out in the news. The first I saw was the New York Daily News with the headline, "Cyndi Lauper blasts gay MAGA activist Brandon Straka's appropriation of 'True Colors' for #WalkAway campaign." And the story then spread to LGBT specific news sources like Out Magazine, the country's largest LGBT publication, who ran headlines like, "No, Gay Republicans, Cyndi Lauper Doesn't Want You Near Her Songs."

In this repudiation of my song and video, you stated to the media, "I have not heard this version and won't be listening to it. I recorded 'True Colors' to be a healing song and it's not appropriate for anything MAGA related....We have free speech in this country, which I would never change, but's we also have the free[dom] to not listen to things that are coming from a place of hate and divisiveness and we have the right to not want our beautiful music co-opted for the wrong reasons."

Hate and divisiveness? Not appropriate? Wrong reasons? You're unwilling to even listen to it because to be connected with me would be a "co-opting" of something that was once beautiful?

When I read your response I couldn't help but feel flashbacks to times in my life when this same type of language was used against me and people like me, just for being gay. "Marriage is a beautiful thing that should not be co-opted by gays". There were even people "unwilling to listen" to Elton John records after he came out of the closet.

Imagine my shock, Cyndi, as a gay man being told by a famous LGBT advocate that I'm doing something wrong or inappropriate because I have decided to no longer go along with the political hive-mindedness of the LGBT community.

Perhaps it would help for you to understand why I walked away from the Democratic Party and leftist ideology in the first place.

Like many on the left, when Donald Trump got elected I was terrified. The mainstream media and LGBT news outlets wasted no time relentlessly churning out stories about how the rights of LGBT people were in danger. Some even indicated that our very lives and our safety were now in jeopardy.

I began researching why anybody would ever vote for such a horrible person. This research became a months-long obsession which ultimately lifted the veil completely for me to see that the media I had trusted my whole life was creating completely false narratives, thoroughly removed from reality, with the explicit purpose of controlling their audience through the manipulation of fear. I discovered that for those of us who are black, brown, or LGBT, we are being fed a constant diet of fear-inducing lies and propaganda designed to keep us angry, afraid, and believing that we are hated, oppressed, victimized, and unsafe.

I discovered that the election of Donald Trump represented a larger awakening within the conservative movement. Many conservatives today have not felt well represented by establishment fundamentalist Republicans of the past. Most modern Republicans don't care much about social issues like marriage equality anymore, so long as religious freedom is also respected.

Donald Trump is not trying to take the rights of LGBT people away. His supporters do not hate LGBT people. Not only are there thousands of LGBT people in the MAGA movement, but most MAGA people realize that they have gay sons, daughters, grandchildren, friends, neighbors, etc- and are completely accepting and supportive of them! This is exactly the world that gay people fought decades for. This is a world that I whole-heartedly support.

Cyndi, with respect, for you to not even be willing to look at my video and see the truth in everything I'm saying here is the exact type of willful ignorance that you spent decades fighting against in your advocacy for the LGBT community.

When you made a public statement shaming me for breaking free from the herd and thinking for myself, you sent a message loud and clear to the LGBT community: "There is only one way to be LGBT. You must only think thoughts that have been approved by the LGBT leftist council. You must believe in progressive ideology. You must conform in words and actions- even art form and expression, if you want to be an accepted member of the group".

You may not have realized it, Cyndi, but your admonishment of me as a gay Trump supporter opened the door for even more of the same type of bullying, harassment, name-calling, and rejection that those of us in the LGBT community receive on a daily basis by other LGBT people just for choosing to speak out about the lying, corrupt, destructive behaviors from the Democrats that put our country and the LGBT community in danger.

One of the great ironies here is that you've aligned yourself with organizations that claim to care about the LGBT community, and claim to be fighting for empowerment, equality, and opportunity for LGBT Americans. I am an independent, self-sufficient gay man who, within the last two years, has created a flourishing and growing political movement and incredibly successful organization with #WalkAway on a side of the political aisle where it is fabled that people like me are not even welcome.

I'm a self-made public political figure who now runs my own operation which allows me to employ over a dozen people. In contrast to the bleak addiction and alcohol abuse issues that disproportionately affect so many in my community, I am nearly six years clean and sober from drugs and alcohol. I'm my own boss, I'm nobody's victim, and I don't accept inhibitions—I see challenges as opportunities to win. And yet, despite all of this, I'm considered an embarrassment to the LGBT community. These thoroughly disingenuous LGBT empowerment organizations are the very first to attack me, lie about me, and methodically smear me to invalidate my accomplishments.

Cyndi, when you choose to be an advocate for a community, I don't think you get to choose to discriminate against people within that community who make political choices you disagree with after they've studied the facts beneath the issues, the purpose of the policies, and the truth behind the manipulative lies and bias of the media.