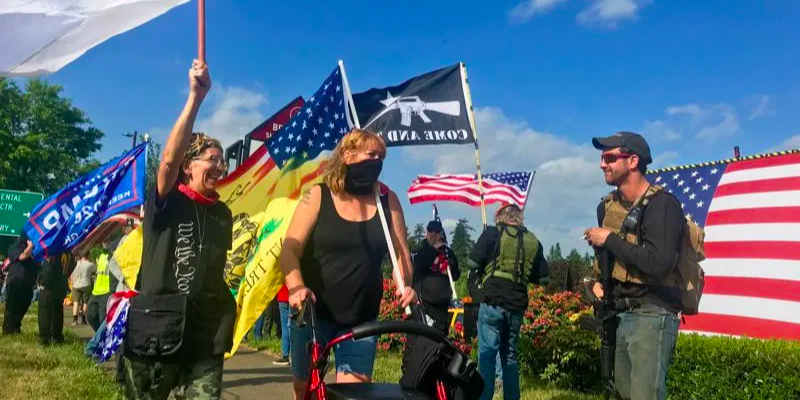 Antifa groups circulated a flyer online last week calling for comrades to counter protest the weekly flag waving event near Clackamas Community College. "Oregon City is allowing fascists to continue and grow their weekly flag wave, if we don't put a stop to it, they will command more control!" the flyer urged. Clackamas Community College canceled classes in light of Antifa's anticipated presence.

"After conferring with law enforcement, we are acting out of an abundance of caution to keep the college community safe by closing our physical campus for the day," the school's executive director of college relations and marketing Lori Hall told Oregon Public Broadcasting. Hall said the college was made aware this past weekend of the social media post promoting the counter Antifa protest.

Friday, the day of the dueling protest, things seemed anti-climatic as Antifa only managed small numbers and gathered at a shopping center near the college campus then quickly left. Portland-based Antifa accounts on Twitter expressed outrage that not enough appeared to shut down the conservative rally.

Police were on scene Friday to keep the opposing groups separate, but there were no reports of any violence breaking out. "The people you call Antifa," one of the right-wing protesters told KOIN 6 News, "they have no idea what Portland is. They watched Portlandia and came here. They're hipsters wearing all black. Hot Topic anarchists," the 42-year-old said to the local news outlet.

In all, at least 250 conservative demonstrators, some armed, protested at the planned event that seemed to occur without incident despite the hype.