On Wednesday, Rep. Alexandria Ocasio-Cortez posted on Twitter about the squalid conditions her grandmother lives in, blaming the situation on former President Donald Trump. 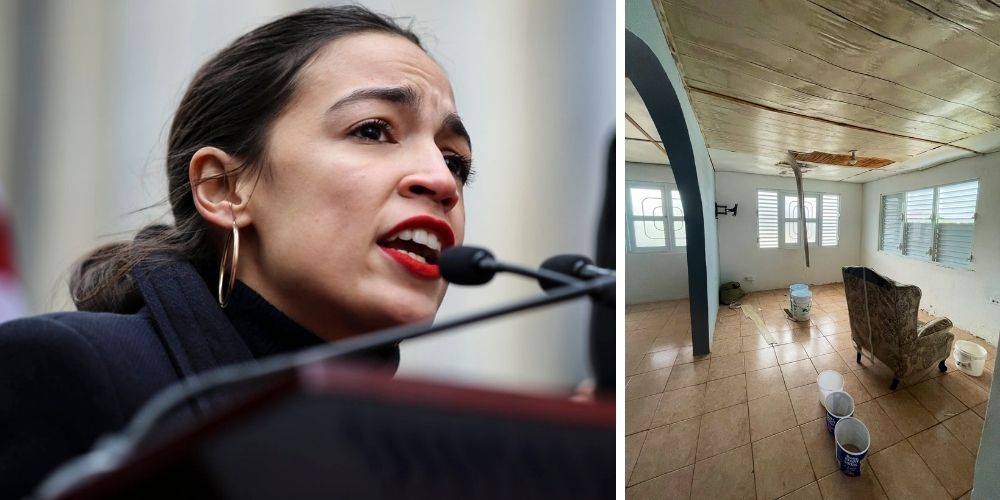 On Wednesday, Rep. Alexandria Ocasio-Cortez posted on Twitter about the "squalid conditions" her grandmother lives in, blaming the situation on former President Donald Trump.

"Just over a week ago, my abuela fell ill. I went to Puerto Rico to see her- my 1st time in a year+ bc of COVID. This is her home. Hurricane María relief hasn’t arrived. Trump blocked relief $ for PR (Puerto Rico). People are being forced to flee ancestral homes, & developers are taking them," her tweet reads.

She continued by stating that in the aftermath of Hurricane Maria, the Trump administration handed out millions in public money to "unqualified donor pals," and imposed "extremely difficult eligibility rules for Puerto Ricans, which allowed mass rejections of recover fund applications."

AOC said that her grandmother is "doing okay," and that the post wasn't about her family "but about what's happening to Puerto Rican's across the island."

Twitter users slammed AOC's post, pointing out that she makes a six-figure salary and should help her family member out. Daily Wire host Matt Walsh told AOC on Twitter that it's "shameful that you live in luxury while allowing your own grandmother to suffer in these squalid conditions."

AOC responded by saying her post was meant to call "attention to the systemic injustices you seem totally fine w/ in having a US colony," and that Walsh had no "concept for the role that 1st get, first-born daughters play in their families."

Candace Owens spoke on AOC's comment, adding that "I came from nothing and am a first generation daughter in my family. I would never allow my grandmother to live in squalor and then post it on the internet to score political points."

"You rake in corrupt millions. Stop being disgusting and get your grandmother a better home," she continued.

The Daily Wire's Ian Hawthorn, noting her $170,000 per year congressional salary, criticized AOC for her politics preventing her from "taking individual responsibility."

"By all available metrics, Ocasio-Cortez is perfectly able to financially support her beloved 'abuela,' if just to make basic structural repairs to her cramped living area," wrote Hawthorn. "However, the notion of taking individual responsibility for one’s own family and community is totally antithetical to Ocasio-Cortez’s ideology. For radical progressives like Ocasio-Cortez, even problems they themselves could solve with one PayPal transfer are the responsibility of others — the faceless 'collective' of society, shrouded in the constrictive veil of government control."

"Why take personal responsibility for those around you when you can demand that 'the government' step in? Why dip into your own pocket when you can expect 'the rich' to foot the bill?" Hawthorn continued.