WATCH: AOC “supporter” at town hall: “We need to eat the babies!”

A “supporter” of Alexandra Ocasio-Cortez stood up at a town hall tonight and stole the show with a modest proposal to solve the “climate crisis.” 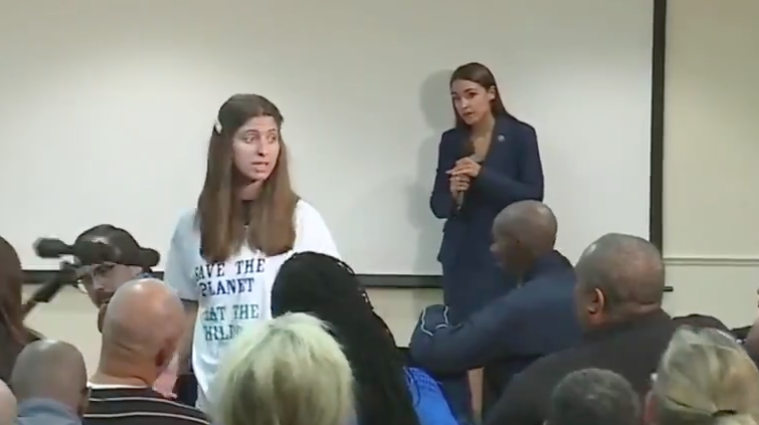 UPDATE: LaRouche, a controversial far-right, anti-zionist group has claimed responsibility for the trolling of AOC. This is yet to be verified and the woman remains unidentified.

A “supporter” of Alexandria Ocasio-Cortez stood up at a town hall tonight and stole the show with a modest proposal to solve the “climate crisis.”

The woman, so far unidentified, took the mic and told AOC her thoughts on the climate crisis, the Green New Deal, and AOC herself:

“We are not going to be here for too much longer. We only have a few months. left. I love that you support the Green New Deal, but it’s not getting rid of fossil fuels. It’s not going to solve the problem fast enough. A Swedish professor [says] we can eat dead people, but that’s not fast enough. So, I think your next campaign slogan has to be this: ‘We have to start eating babies.'”

The woman then revealed a shirt that said: “SAVE THE PLANET, EAT THE CHILDREN.”

Se continued by praising AOC: “You are so great.  Even if we would bomb Russia, we still have too many people … We need to eat the babies!”

AOC responded, “Luckily we have more than a few months.”

The woman insisted from the crowd: “No, we don’t.”

While it seems apparent that the woman was a high-level troll, AOC tweeted her response on Twitter to the incident by suggested that she believed the woman, much like the climate, was in crisis.