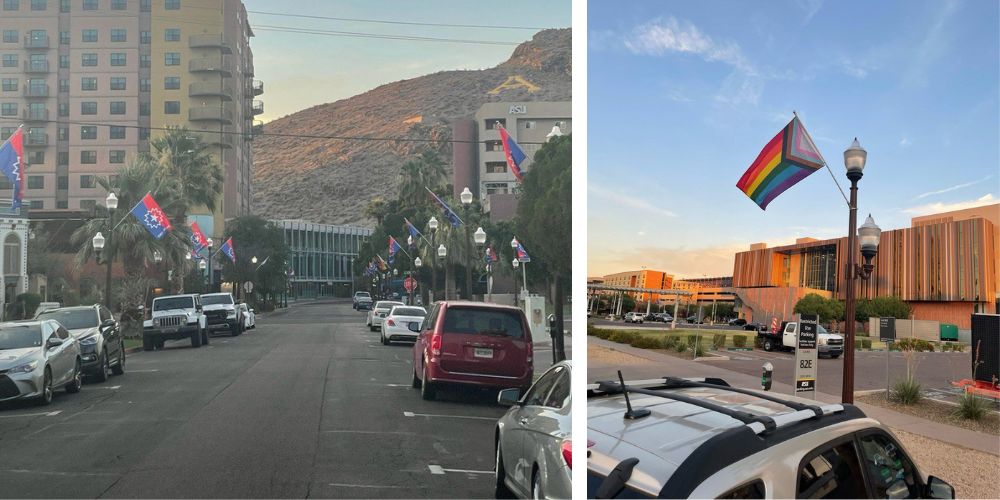 "Originally, the flags outside my apartment on campus were all American flags, then, at the start of June following the Memorial Day holiday, they replaced every other flag with pride or 'progress' flags.

Kirk wrote that he and Candace Owens "came out against Juneteenth" last year, the same year that President Biden declared the day a federal holiday.

"We tried to warn people this would create anti-Americanism and a distraction from July 4th," Kirk wrote.

"Now on the campus of @ASU in Tempe they are taking down American flags and putting Juneteenth and 'Pride Flags' in their place," Kirk continued.

Pride Month is now halfway over, with Juneteenth occurring in the latter half of the month.

Juneteenth signifies the the day that enslaved men and women in Texas were made aware of the abolishment of slavery, around two years after the United States acted to abolish it.

Biden said Juneteenth is "a day of profound weight and profound power, a day in which we remember the moral stain and the terrible toll that slavery took on the country — and continues to take."

Last year, Kirk tweeted that Juneteenth, which occurs around two weeks before the 4th of July, "is about replacing July 4th" as the day of independence, glossing over the struggles of our founding fathers' fight against British rule.

In a series of tweets posted by Owens last June, she  said that Juneteenth is "lame," and that "this is not a holiday."

"This is more emotional training from Democrats to see ourselves as somehow separate from America," she wrote.

Another tweet from Owens said that Juneteenth is "more emotional programming for black people that choose to opt in to the perpetual victim mentality."