"The future of Title IX, the opportunities that have come about because of it, are at peril because of the actions and policies coming from the Biden administration." 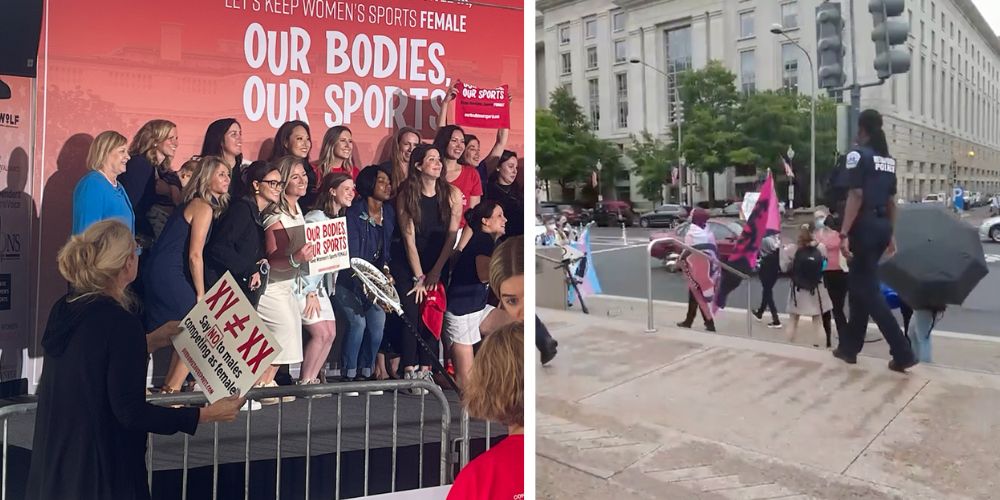 On Thursday, marking the 50th anniversary of Title IX, people gathered in Washington DC’s Freedom Plaza to listen to a variety of women talk about the necessity of protecting women’s and girls’ sports from biological male competitors. This as the Biden administration's Department of Education proposed new rules on Thursday to remove Title IX rights for women in favor of those for gender identity.

The event, Our Bodies, Our Sports, was put on by a number of sponsors, including women’s groups Independent Council on Women’s Sports, the National Federation of Republican Women, the Women’s Liberation Front, and Concerned Women for America, as well as other conservative groups like The Heritage Foundation, Army of Parents, and Turning Point Action.

The event featured women from all walks of life, including college and high school athletes, professional athletes, lawmakers, and parents, who spoke passionately about the necessity of keeping sports divided by biological sex, not by gender identity.

The two tied, with Thomas being handed the fifth place trophy for photos, while Gaines was told her trophy would be sent in the mail.

Addressing the crowd, Gaines described the sacrifices she made from an early age to compete in the sport, stating that she missed countless vacations and days off to practice or compete.

As Gaines began speaking, a small group of protestors carrying various flags, including a trans pride flag bearing the Antifa symbol, began banging on drums, blaring sirens, and blowing on whistles to drown out the speakers, though their efforts were unsuccessful.

"In November of last year, in the middle of our collegiate season, it seemed as if I was gonna get my chance," Gaines said, speaking on how previous NCAA championships had been canceled due to COVID.

"I was ranked fourth in the nation in the 200 yard freestyle behind some amazing names I was familiar with, and one that I wasn’t. This was the first time I had heard of Lia Thomas. For all I knew, this was a swimmer from the University of Pennsylvania who had come out of nowhere senior year to post the fastest time in the nation," she said.

"It didn’t make sense to me until I read an article clarifying Lia was formerly Will Thomas, a male who swam for three years on the men’s team at UPenn," Gaines continued.

Gaines said she was "shocked," but thought that "there was no way this could matter come March, because the NCAA would not allow Thomas to compete with us."

"I was proven very wrong three weeks before our NCAA championships were meant to start, when the NCAA announced that Thomas would be able to compete with the women."

Gaines said she experienced firsthand the reactions and discomfort from other female athletes at the competition that had to compete against Thomas or change in the locker rooms with the biologically male athlete, and saw tears shed by the ninth and sixteenth place finishers edged out by Thomas being allowed to compete.

"Who took into account our feelings? Nobody did. Who took any sort of accountability since this? No one has," she said.

Speaking later in the event, Idaho State Rep. Barbara Ehardt described her life growing up before Title IX, and how following its passing, she was allowed to follow her dreams of a career in sports.

"I kept my dreams alive, I was able to play junior high basketball, high school basketball, went on to play college basketball on a scholarship," she said, adding that after that, she went on to coach division one women’s basketball for 15 years before delving into politics.

Also speaking at the Our Bodies, Our Sports event was former US Representative Tulsi Gabbard, who said that the future of Title IX is in "peril" because of the Biden administration.

"We’ve seen 50 years of progress since Title IX, but the future of Title IX, the opportunities that have come about because of it, are at peril because of the actions and policies coming from the Biden administration, and Congress’ failure to act thus far to protect women and girls in sports," she continued.

During the event, emcee Jennifer Braceras called out US women's soccer player Megan Rapinoe, who recently said that "I’m sorry, your kid’s high school volleyball team just isn’t that important. It’s not more important than any one kid’s life," in reference to having transgender kids play on the team that matches their gender identity.

While the date marked the 50th anniversary of Title IX’s passing, it also marked the release of proposed changes to Title IX by the Biden administration.

Included in this proposal was a portion that would make it a violation to prevent a person from participating in activities that align with their gender identity. The proposed change could undermine laws passed in states recently, which restrict sports participation to  biological sex, not gender identity.

The Department of Education’s proposal "would make clear that preventing someone from participating in school programs and activities consistent with their gender identity would cause harm in violation of Title IX."