The company has since announced the intention to sue the ad creator after further scrutiny revealed court documents from a case that made computer-generated or -altered child sex abuse images legal in the US were used as a prop in a separate ad. 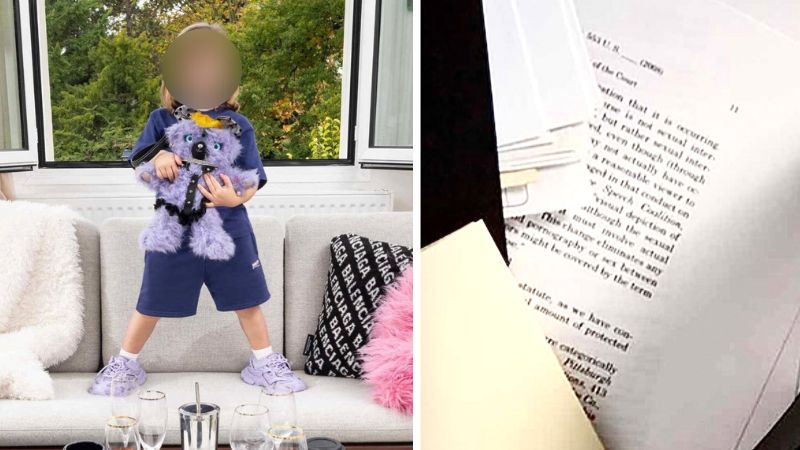 Luxury fashion brand Balenciaga is doing damage control after finding itself at the center of a social media storm over a controversial ad campaign featuring photographs of children holding teddy bears wearing bondage gear that triggered a wave of angry backlash.

The company has since announced the intention to sue the ad creator after further scrutiny revealed that disturbing court documents from a case which made virtual and fake child sex abuse images legal in the US were used as a prop in a separate ad.


The story began late last week when a woman shared screenshots on Twitter of the disturbing photographs of young children holding teddy bears dressed in bondage gear. The images were taken from the Balenciaga website, but have since been deleted.


According to Reduxx, the photograph depicting a child standing on a pink bed holding a teddy bear wearing wrist and ankle restraints, a fishnet top, and a leather collar was taken from the main page of the Balenciaga US site.

The photographs are the work of National Geographic photographer Gabriele Galimberti, whose "Toy Stories" project features a series of photographs from around the world of children surrounded by their favorite toys.

The photographs of the children were sufficiently unsettling to trigger an outpouring of outrage on social media, but then the plot thickened when it was pointed out that in a separate ad, court documents from a Supreme Court case regarding child sexual abuse materials were used as a prop in a photograph advertising one of the brand’s luxury handbags.

That 2002 Supreme Court case decision in Ashcroft v Free Speech Coalition determined that some provisions of the Child Pornography Prevention Act of 1996 relating to computer-generated or -altered depictions of minors engaging in sexual acts and images of adults who appear to be minors engaging in sexual acts were overly broad and violated free speech protections provided by the First Amendment.

In a further twist, Reduxx reports that Balenciaga can no longer be found on Twitter after recently deleting their account in protest of Elon Musk taking over. One of the first orders of business on Musk’s agenda has been to tackle the issue of child sex abuse materials being shared on the social media platform.

Outraged people took to Twitter to express their disgust at the images.

One person pointed out that the photographer appeared to know exactly what he was doing given the look on the children’s faces.

In response, Balenciaga issued a statement publicly apologizing for the ad campaign and stating their intention to take legal action against the ad creator.

But this wasn't enough for some. "They signed off on this," one person tweeted. "Balenciaga can’t hide behind a scapegoat after public backlash after they tried to normalize commercial child sexual exploitation."

Carlson pointed out that whoever staged the photograph with the court documents "made certain to include the portion of that opinion that used the word sex or sexual four times," which he believes was not an accident.

"There’s never been a time in American history where pedophilia was considered anything other than the worst [and] most horrifying crime imaginable," said Carlson before questioning why there’s no outrage about this story from mainstream news outlets, and "no talk of an investigation or a boycott."