Beto O’Rourke is the Justin Trudeau of America

They each come from well to do backgrounds of privilege, with both men’s families well entrenched in politics since their youth. 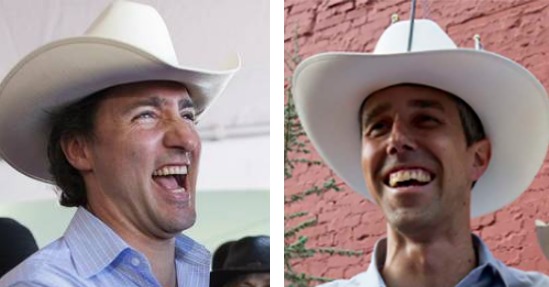 Robert “Beto” O’Rourke is one of the nearly 20 people running for the Democratic presidential ticket. You may have heard his name once or twice before as he’s received plenty of media coverage over the past year due to his high profile, yet ultimately unsuccessful run against Senator Ted Cruz in Texas last year.

The object of many a fawning cover piece from various media outlets like the Guardian, Washington Post, Vanity Fair, Time, and GQ, Beto had no problem attracting attention during his foray into broader, national politics.

With his youthful good looks, energetic charm, and quirky indie rock past, he seems a lot different than your typical politician on first glance. And while he’s certainly not your average presidential candidate, there are many parts to his story and persona that may remind Canadian followers of a certain politician back home.

You see, it’s not only the youthful charm and energy that makes the Trudeau comparison apt, as it turns out, both men have quite a number of similarities.

They each come from well to do backgrounds of privilege, with both men’s families well entrenched in politics since their youth.

For Trudeau, the most obvious example is his father, who was one of Canada’s longest serving and most impactful Prime Minister’s. However, even before Trudeau Sr. got involved in politics, Trudeau’s maternal grandfather, James Sinclair, served as the Minister of Fisheries in the cabinet of Prime Minister Louis St. Laurent.

O’Rourke’s father, Pat O’Rourke, served as County Commissioner and County Judge in El Paso, was a close associate of Texas Governor Mark White, and also served as state chairman for the 1984 and 1988 presidential campaigns of Jesse Jackson.

Both men have also made great use of social media, leveraging the various platforms to increase their profile and connection with younger audiences. For Trudeau the selfie was and is very much part of his brand, showing his ability to connect with people. O’Rourke is a big sharer as well, even going so far as to livestream his visit to the dentist.

While social media has been a great boon to both men, it has also been a source of criticism, with their detractors pointing to their heavy usage as a substitute for substantial policy.

While Trudeau has now had nearly four years of governance under his belt, he is not widely considered to be a policy wonk by any stretch and is often fond of using shallow catchphrases like “the budget will balance itself” or most famously on his gender equal cabinet, “because it’s 2019.”

Despite other presidential hopefuls coming out with many different policy ideas and solutions, O’Rourke and his campaign have been rather scant on the details. Preferring to focus on unity and creating “a movement,” O’Rourke’s campaign website doesn’t list a single policy idea.

Another striking comparison between the two politicians is the rather sparse resumes they contained before pursuing elected office. Trudeau famously worked as a drama teacher in Vancouver in addition to stints as a white water rafting guide and a snowboard instructor. O’Rourke toured as a member of the punk band Foss, worked as a live-in caretaker, art mover, and internet service provider before winding up in municipal politics.

Both men are also ardent progressives, who strive to stay as woke as possible despite their straight, white identities.

Trudeau, of course, has been very active on the gender front, ensuring the his government views literally everything through a gender lens. Despite being hard at work on the feminism file, Trudeau still manages to find the time for other key members on the identity politics coalition, never missing the opportunity to show up at a Pride march or find some money in the federal coffers for efforts to reduce “systemic racism.”

O’Rourke, after facing some criticism for quipping that his wife is raising their three kids, “sometimes with his help,” acknowledged he need to be “more thoughtful” when speaking about his white privilege.

So, what do all these similarities mean? Well, for O’Rourke, if he can take his cues from Trudeau and “Trudeaumania” and ride the wave of “Betomania” in the White House, these comparisons could be a source of aid.

However, as Canadians are now finding out, electing a man who’s all charisma and no character may not be the best long term strategy.

What do you think? Is the Beto – Trudeau comparison fair? Let us know by commenting below!