This isn't the first time Biden's athletic career with his alma mater has come into question. At a 2012 campaign stop, he falsely claimed to have played in the 1963 game when the Blue Hens beat the Ohio University Bobcats. 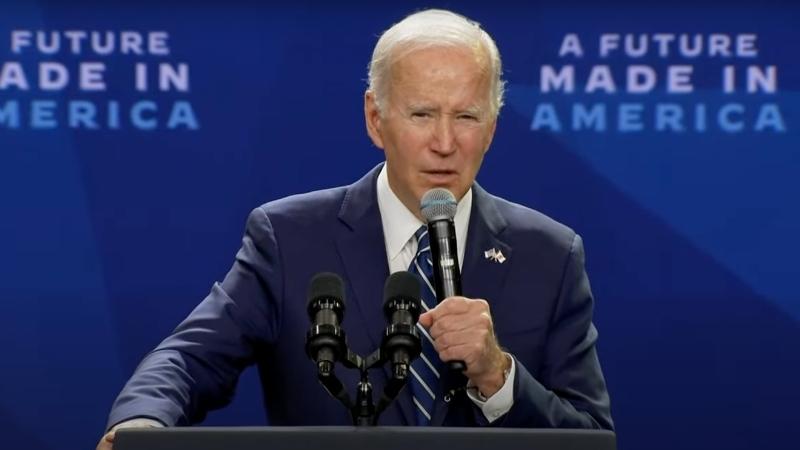 Olivia Rondeau
Oct 28, 2022 minute read
ADVERTISEMENT
ADVERTISEMENT
In his latest gaffe, President Joe Biden during a Thursday speech claimed that he gave up his "starting job" on the University of Delaware football team to be with his first wife, the late Neilia Hunter Biden.

In his 2008 memoir, "Promises to Keep," then-Senator Biden wrote that he quit playing football with the Blue Hens following the 1963 fall season to improve his grades. According to the Daily Pennsylvanian, he had a grade point average (GPA) of 1.9 at the time.

"When my first semester grades came out, my mom and dad told me I wouldn’t be playing spring football," he wrote in his book.

However, he seemed to contradict this while speaking in Syracuse, NY, on Thursday, reported Fox News. The 79-year-old said of his late wife, "I met her on spring break and fell head over heels in love with her and gave up a starting job on the football team in Delaware to come up… every weekend because I couldn't stay away."

This isn't the first time Biden's athletic career with his alma mater has come into question. At a 2012 campaign stop, he falsely claimed to have played in the 1963 game when the Blue Hens beat the Ohio University Bobcats.

"I just double-checked my memory, you know, you get to my age, and you're not so sure you remember. You know, your glory days look more glorious than they really were," then-vice president Biden. "I went back on the internet, and I just want you to know that I came here on Oct. 19, 1963, and we beat you Bobcats, 29-12."

The University of Delaware's sports information department told the Huffington Post in 2012 that Biden only briefly played on the freshman team, and didn't participate in the 1963 Ohio game.

In the same Syracuse speech, Biden also made the false claim that gas prices were "over $5" when he entered the presidential office, when it was actually $2.39, according to Townhall.