Biden empowered the National Archives to waive any claims to executive privilege that Trump might assert to block the DOJ from accessing the documents. 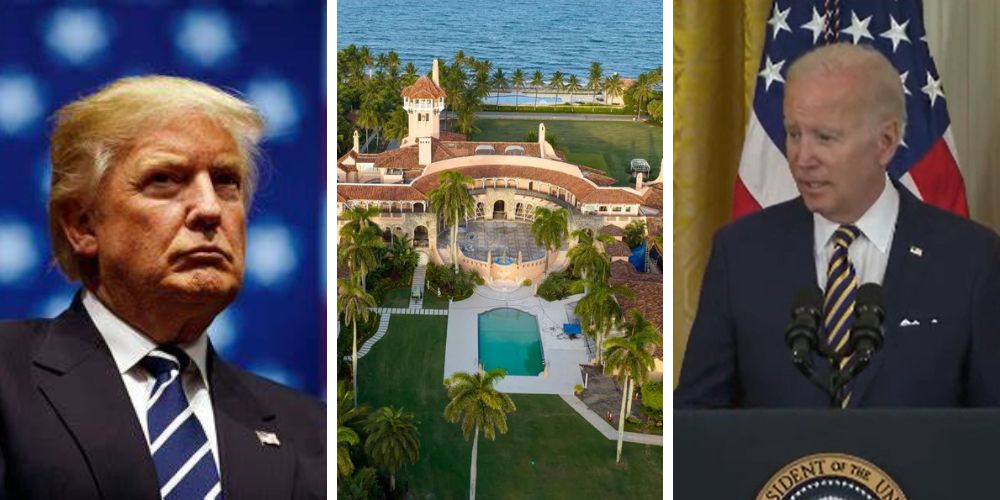 The Biden administration worked directly with the Department of Justice and the National Archives to begin the criminal probe into the alleged mishandling of documents, despite claiming they were "not briefed" of the raid on former President Donald Trump's Mar-a-Lago estate, according to a new report.

The actions taken by the administration, together with the DOJ and the National Archives, allowed the FBI to review evidence retrieved from Mar-a-Lago this spring and eliminated Trump's claims to executive privilege, Just the News reported.

Government documents reviewed by the outlet showed that then-White House Deputy Counsel Jonathan Su was in discussions with the DOJ as early as April, along with the FBI, and the National Archives, shortly after 15 boxes of classified and other documents were voluntarily returned from Trump's Florida home.

Su conveyed to the Archives by May, months before the FBI raided Trump's Florida home with a court-issued search warrant, that President Joe Biden would not object to waiving his predecessor's claims to executive privilege. This enabled the DOJ to obtain a subpoena from a grand jury which compelled Trump to turn over any remaining materials in his possession from his presidency.

A letter dated May 10 that acting National Archivist Debra Steidel Wall sent Trump defense attorney Evan Corcoran read, "On April 11, 2022, the White House Counsel's Office — affirming a request from the Department of Justice supported by an FBI letterhead memorandum — formally transmitted a request that NARA provides the FBI access to the 15 boxes for its review within seven days, with the possibility that the FBI might request copies of specific documents following its review of the boxes."

According to the letter, Biden empowered the National Archives to waive any claims to executive privilege that Trump might assert to block the DOJ from accessing the documents.

Wall wrote, "The Counsel to the President has informed me that, in light of the particular circumstances presented here, President Biden defers to my determination, in consultation with the Assistant Attorney General for the Office of Legal Counsel, regarding whether or not I should uphold the former President's purported 'protective assertion of executive privilege.”

"... I have therefore decided not to honor the former President's 'protective' claim of privilege."

The memos provide the most definitive evidence to date of the current White House's effort to facilitate a criminal probe of the man Joe Biden beat in the 2020 election and may face again as a challenger in 2024. That involvement included eliminating one of the legal defenses Trump might use to fight the FBI over access to his documents.

In her letter obtained by Just the News, Wall told Corcoran that the Biden administration believed a Watergate-era ruling suggested Biden had the authority to waive Trump's privileges. "The Supreme Court's decision in Nixon v. Administrator of General Services, 433 U.S. 425 (1977), strongly suggests that a former President may not successfully assert executive privilege 'against the very Executive Branch in whose name the privilege is invoked.'"

Wall wrote regarding boxes of documents returned from Trump's compound in February 2022 which had been packed up by the General Services Administration as Trump was leaving the White House on Jan. 20, 2021, "In its initial review of materials within those boxes, NARA identified items marked as classified national security information, up to the level of Top Secret and including Sensitive Compartmented Information and Special Access Program materials.”

“NARA informed the Department of Justice about that discovery, which prompted the Department to ask the President to request that NARA provide the FBI with access to the boxes at issue so that the FBI and others in the Intelligence Community could examine them."

Additionally, the documents reveal that Corcoran had a phone conversation with Su about privilege claims in the spring. The former president’s lawyers raised concerns that some of the materials were subject to Trump's claims of executive privilege.

Corcoran wrote to National Archives General Counsel Gary Stern on April 29 and copied Su on the letter. "We have requested the ability to review the documents. That review is necessary in order to ascertain whether any specific document is subject to privilege. We would respectfully request that you restrict access to the documents until we have had the opportunity to review the documents and to consult with President Donald J. Trump so that he may personally make any decision to assert a claim of constitutionally based privilege."

Almost two weeks later, Wall informed Corcoran that she had the blessing of Biden to overrule those privilege claims and share all materials requested by the DOJ and FBI.

"The White House Counsel's Office acquiesced in an extension of the production date to April 29, and so advised NARA. In accord with that agreement, we had not yet provided the FBI with access to the records when we received your letter on April 29, and we have continued to refrain from providing such access to date.”

"It has now been four weeks since we first informed you of our intent to provide the FBI access to the boxes so that it and others in the Intelligence Community can conduct their reviews. Notwithstanding the urgency conveyed by the Department of Justice and the reasonable extension afforded to the former President, your April 29 letter asks for additional time for you to review the materials in the boxes.

Several weeks after Wall's letter to Corcoran, the DOJ sent a grand jury subpoena to Trump's legal team demanding the return of any remaining national security documents, which led to a voluntary visit by the FBI to Mar-a-Lago on June 3. Agents collected a small number of materials Trump's lawyers said were responsive to the subpoena