Sullivan is apparently the "foreign policy advisor" in the indictment of Michael Sussman, a former attorney for the Clinton campaign. 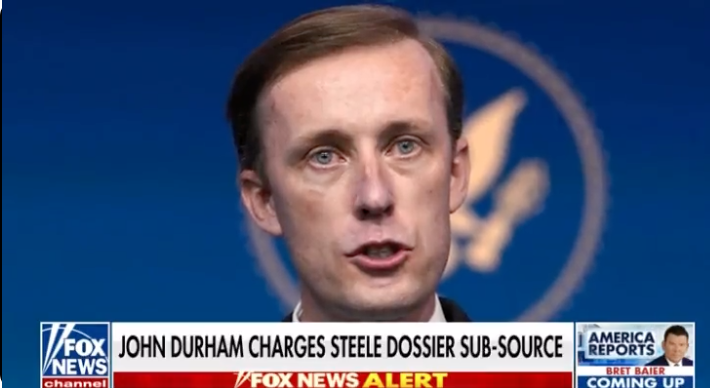 Additional indictments are forthcoming from the Durham Report, and now it seems that National Security Advisor Jake Sullivan is wrapped up in the dodgy affair. Sullivan is apparently the "foreign policy advisor" in the indictment of Michael Sussman, a former attorney for the Clinton campaign.

Sussman has been indicted as a result of the probe, under charges of lying about Trump's alleged ties to Russia, which turned out to be false.

On Wednesday, it was reported that Sussman "communicated information with a Clinton foreign policy adviser," and that advisor, Fox News reports, was Sullivan. Sullivan has already been revealed by Durham's investigation to have promoted the fake story of Trump Russia collusion, the so-called Alpha Bank story, as that was name of the case Sussman working on, hours for which he billed to the Clinton Campaign at the white-shoe law firm Perkins Coie.

"That correspondence happened in September 2016," Fox reported. They had reached out for comment, but none had yet been forthcoming.

Deputy White House Press Secretary Karine Jean-Pierre was asked about these revelations during a press briefing on Wednesday, but she had not yet heard about it.

"And Sullivan is the foreign policy advisor mentioned in the former Clinton lawyer, Michael Sussman's, indictment," Jean-Pierre was asked. "I understand this just came across the podium, so you haven't really had a chance to read into that. But what is the White House comment on that? And is there any conflict here, given that there has been news around the indictment. Is there any conflict here that would preclude Solomon from being able to carry out his duty?"

"I'm just know hearing this," Jean-Pierre said, "so I don't have a comment for you at this moment. I don't know anything about what you're you're just mentioning so I have to talk to our team."

"There has been a news around this over the last couple of weeks," the reporter continued. "Sort of this feeling it's falling apart after the revelations of the Clinton-tied lawyer had lied to the FBI. Now knowing what we know about the dossier, is there any concern there was a lot of focus or too much focus on that during the President's campaign?"

Jean-Pierre referred these questions to the Department of Justice, saying that she would not be commenting on it during the briefing.