BLM protests have continued their call for defunding police departments, but they have since added a new target for their anger— the Jewish state of Israel. 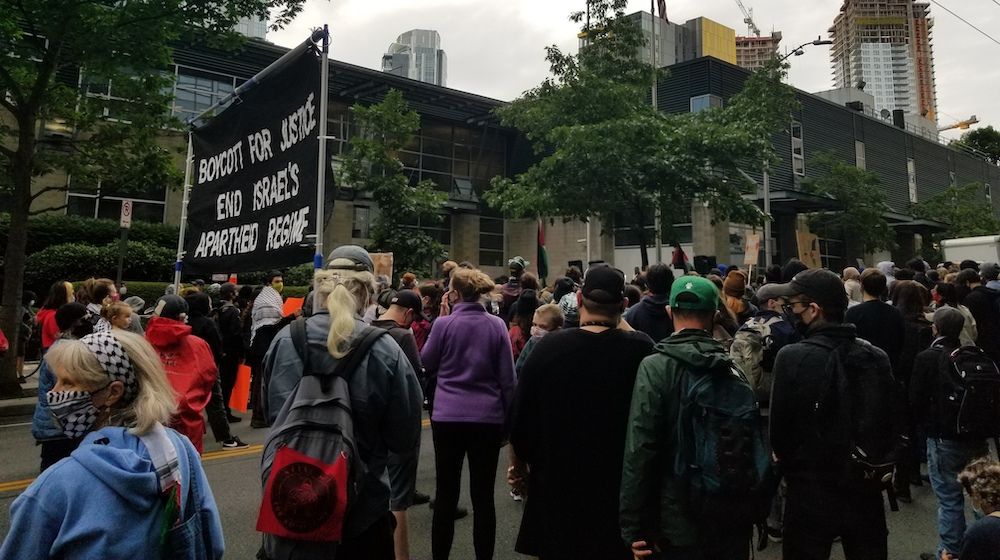 Across the US, Black Lives Matter protests have continued their call for defunding and abolishing police departments, but they have since added a new target for their anger— the Jewish state of Israel.

In an interview about his visit to the Capitol Hill Occupied Protest (CHOP) with documentary film maker Ami Horowitz of Canary In A Coal Mine, Horowitz discussed the growing amount of anti Israel and anti Semitic messaging he was hearing from the Black Lives Matter protests.

"There is a significant amount of anti Semitism that is imbued in the Black Lives Matter movement… I was attacked for being a Jew verbally while I was there (in the CHOP) they kept pointing out that Ben and Jerry’s supports Israel."

Anti-Israel and anti-Semitic graffiti, signs and rhetoric have been recorded and has appeared at Black Lives Matter protests across the country.

“Black Lives Matter is ostensibly there to protect black lives. To say ‘hey we are being put upon, we are being brutalized by the white folks, the police’…the reason I say ostensibly is when you look at their manifesto, they talk a lot about black lives all the things you would expect them to say, but they devote time to only one issue outside of black lives matter and that is to push the canard, the libel that Israel is committing genocide", Horowitz said.

He went on to say that "They find it so important, they find Israel to be such an obnoxious state to them, their way of being, that they had to find time to point out the Jewish state, to push this lie that Israel is committing genocide.”

Horowitz continued “All our Jewish friends who are supporting Black Lives Matter and I support black lives, everyone I know supports black lives but the organization itself is deeply problematic when it comes to anti Semitism and our Jewish friends who stand with them, and I support them standing with them… need to come to the realization that there are some significant issues with the organization.”

When I asked Horowitz if he has received pushback from Jewish friends about the anti-Semitism in the BLM movement he answered: “Absolutely… if they found the time to discuss Jews and Israel there is no way I could ignore it. There’s just no way. It’s an issue I have had with a number of Jews not only in my friend circle but Jews who I have come across during these protests. They are for the most part cognizant of it but let’s be honest for Jews Israel does not rank as one of their top 10 issues, so they choose to ignore it unfortunately.”

Meanwhile, a “Day of Rage” was organized across the country to protest the annexation of areas in Judea and Samaria as outlined by the most recent proposed Middle East Peace plan from the Trump Administration. The day before the protests the Israeli Prime Minister Benjamin Netanyahu announced a delay in the annexations. This did not stop organizers from forging ahead with their demonstrations.

The events were co-sponsored and advertised by many known anti-Israel organizations including some with ties to terrorist organizations like Hamas and Hezbollah. More unsettling was the participation of organizations representing the Black Lives Matter Movement.

Black Lives Matter first published their anti-American and anti-Semitic platform in 2016. According to Carolyn Glick, chief columnist for The Jerusalem Post, “Jewish organizations from left to right condemned it for its slanderous accusation against Israel which it accused of committing 'genocide' and claimed was an 'apartheid' regime that had passed 50 discriminatory laws against Palestinians. BLM’s charter also endorsed and joined the movement to the anti-Semitic boycott, divestment and sanctions operation against Israel and its American Jewish supporters. Contemporaneous accounts of the American Jewish community’s responses were published in a number of Jewish publications. Tablet online magazine for instance noted that the far-left Truah organization, the Anti-Defamation League and Peter Beinart all condemned the platform."

Though the original links no longer function for the original platform, today the section of the BLM platform on Israel can be found here under the "Cut Military Expenses Brief".

During the initial week of protests in the wake of the death of George Floyd, BLM rioters vandalized five synagogues and three Jewish schools. The graffiti on Beth El synagogue in the Fairfax neighbourhood of Los Angeles read "F**k Israel, Free Palestine".

Fairfax is the oldest Jewish community in Los Angeles, largely populated today by ultra-Orthodox Jews and most of the Jewish businesses on Fairfax Avenue were looted. Frontpage Magazine detailed the attacks, calling them a “modern day pogrom”. In the article, Allyson Rowen Taylor, the former Associate Director of the American Jewish Congress in LA, and a co-founder of StandWithUs, passed on an account of hearing chants of, "F___ the police and kill the Jews."

BLM delegates have even travelled to Nazareth to meet with activist and leadership. In wake of the Ferguson protests in 2016 this trip was part of BLM forging relationships with terrorist groups dedicated to the destruction of Israel, such as Hamas.

Rabbi Pini Dunner, of the Young Israel of North Beverly Hills, wrote, "If supporting BLM means collective suicide, you can count me out."

Many Jews are also uncomfortable with the defund/abolish the police message currently being pushed by the BLM movement. They feel that it leaves them and their institutions and synagogues at risk.

Thursday in Seattle, activists from BLM and the Capitol Hill Occupied Protest (CHOP) including Antifa. rallied against the Jewish state in front of the West Police Precinct as part of the Day of Rage.

Protesters demanded the defunding of the police department, specifically its joint counter terrorism training with Israel, along with other demands pertaining to the Jewish State that were not in SPD’s power or any Seattle elected official to deliver on such as a halt to Israel’s annexation of the West Bank.

Anti-Semitic rhetoric including "the Jews don’t deserve their own state" and that the "Jews are committing genocide" along with accusations of the Jewish and Zionist agenda/conspiracy was common among the organizers and the participants along with a healthy dose of anti American sentiment and socialist ideology.

A Jewish student who volunteers for Israel advocacy organizations was videoing the event when he had a phone knocked out of his hand and was accosted by participants in the rally because they did not want him recording despite the presence of multiple cameras as well as people recording with their phones.

At the conclusion of my interview, I asked Horowitz if the video footage of the anti Semitic comments and attacks he experienced during the BLM protests across the country were going to make their way into his next documentary. Horowitz coyly responded, “I refuse to answer.”