"Today, I’m calling on Congress to suspend the federal gas tax for the next 90 days through the busy summer season, busy travel season," said Biden. 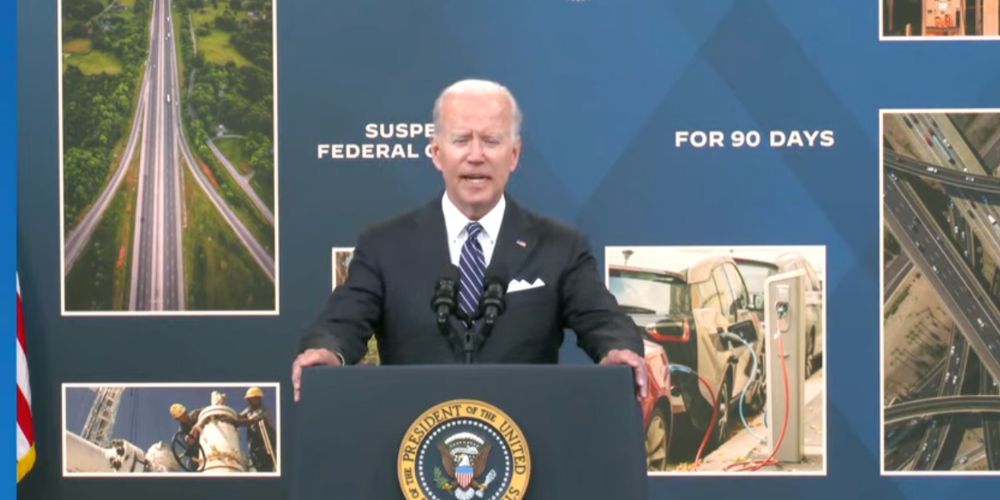 In a speech issued on Wednesday, President Biden called upon Congress to suspend the federal gas tax for the next 90 days, spanning through the busy summer travel months, and called on states to either suspend their state gas taxes, or find other ways to provide relief at the pump.

"Today, I’m calling on Congress to suspend the federal gas tax for the next 90 days through the busy summer season, busy travel season," said Biden.

Biden said that he’s proposing this gas tax relief over the summer "without affecting the Highway Trust Fund."

"And here’s how we do that," Biden continued. "With the tax revenues up this year, and our deficit down over $1.6 trillion this year along, we’ll still be able to fix our highways and bring down the prices of gas. We can do both at the same time."

"I call on the companies to pass this along, every penny of this 18-cent deduction to the consumers. This is — there's no time now for profiteering," he continued.

Biden also recommended that states either suspend their gas taxes, or "find other ways to deliver some relief."

"Gas taxes is average 30 cents per gallon. Already some states have acted. In Connecticut and New York, the governors have temporarily suspended their gas tax as well. In Illinois and Colorado, governors delayed theirs to give families a bit more breathing room as well," Biden said, noting that Minnesota has proposed giving households a rebate to help pay for gas or other essential needs.

"I'm calling on more states and local governments to take actions like these. Thanks to our historic economic recovery, which fortified state budgets that had been hurt in the pandemic, states are now in a strong position to be able to afford to take some of these actions.

Biden continued on calling out Republicans that have stated that the Biden administration’s policies have directly affected gas prices at the pump.

"Here’s the truth. Just this month, America produced 12 million barrels of oil per day. That’s higher than average under my predecessor. And we’re on track to set a new record for production next year," he said.

In regards to refineries that shut down during the pandemic, Biden stated that he sent a letter last week requesting that these companies work with his administration to bring these refineries back online.

"So the issue isn't oil production alone. A problem is the refining of that oil in the gas at the pump," he said.

Biden continued on stating that "this is a time of war" and "global peril," and urged gas companies to "bring down the price you are charging at the pump to reflect the cost you are paying for the product… do it today. Your customers, the American people. They need relief. Now."

Later in his speech, Biden surmised how the nation got into this high gas price situation, placing the blame on Putin, as he has done so previously.

"But it wasn't just Putin's invasion of Ukraine. It was the refusal of the United States and the rest of the free world to let Putin get away with something we haven't seen since World War II. I said at the time, siding with Ukraine during the most serious aggression in Europe since World War II, defending freedom, defending democracy, was not going to go without cost for the American people and the rest of the free world," he continued.

"We're going to have to pay a price as well in the cost of military equipment, economic assistance, humanitarian relief, and sanctioned Russian banking industries. Russia is also the largest oil — one of the largest oil producers in the world. We cut off Russian oil into the United States. And our partners in Europe did the same. Knowing that we would see higher gas prices. We could have turned a blind eye to Putin’s murderous ways, the price of gas wouldn't have spiked the way it has," he said, noting that that "would be wrong."

Biden continued on to state that "the American people" as well as congress "understood" that their support of Ukraine would come with a "cost."

Biden also called for lower prices of electric vehicles "so we never have to pay the pump in the first place," and that his administration is "investing almost $100 billion in public transit and rail."

He then pivoted to calling for more clean energy sources, stating that "we can deal with this immediate crisis of high gas prices and still seize the clean energy future."

"We just have to keep going. I promise you I'm doing everything possible. Everything possible to bring the price of energy down, gas prices down. I want to make sure we all work on this together," Biden concluded before walking away without taking questions.