BREAKING: Biden imposes sanctions on Russian banks, elites, and their families, in response to Ukraine 'invasion'

Biden said that Russia's actions were a "flagrant violation of international law and demands a firm response in the international community." 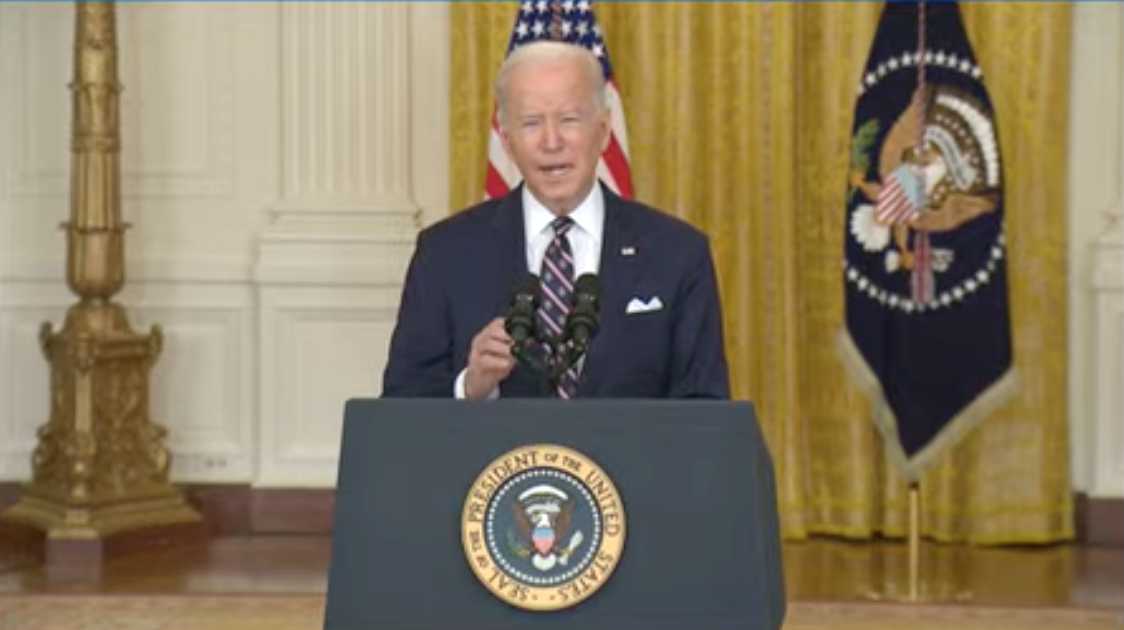 President Joe Biden addressed the nation and the world on Tuesday, explaining the US position with regard to Ukraine, and Russia's potential invasion of that European nation.

Biden said that what was seen this week, with Russia recognizing the independence of two Ukrainian states, is the "beginning of a Russian invasion of Ukraine."

As a result, Biden said "I'm going to begin to impose sanctions," which he said are a "response far beyond the steps we and our allies and partners implemented in 2014. And if Russia goes further with this invasion, we stand prepared to go further, as with sanctions."

He said that Russia's actions were a "flagrant violation of international law and demands a firm response in the international community."

"I'm announcing the first tranche of sanctions to impose costs on Russia in response to their actions yesterday," Biden said. "These have been closely coordinated with our allies and partners, who will continue to escalate sanctions if Russia escalates."

These include banking sanctions on two Russian banks, VEB and "their military bank," Biden said.

"We're implementing comprehensive sanctions on Russian sovereign debt. That means we've cut off Russia's government from Western financing. It can no longer raise money from us and cannot trade in its new debt or our markets or European markers either. Starting tomorrow and continued in the days ahead," Biden said.

These include the imposition of sanctions on "Russia's elites and their family members." Biden said that this is because they shared in the gains of "Kremlin policies and should share the pain as well." He also said that the Nordstream Two Pipeline "will not, as I promised, will not move forward."

"As Russia contemplates its next move," Biden said, "we have our next move prepared as well. Russia will pay an ever steeper response if it continues its aggression, and additional sanctions."

Biden said that the US will continue to provide material aid to help Ukraine defend itself, would defend NATO were Russia to move into NATO territory, but would not bring troops to the ground in Ukraine.

"Let me be clear, these are totally defensive moves on our part. We have no intention of fighting Russia. We want to send an unmistakable message though, that the United States together with our allies will defend every inch of NATO territory and abide by their commitments," he said.

Biden said that "there is no justification" for Russia's actions, and that the administration would make sure that Russia, not the US, feels any economic pain as a result of the current situation.

"I want to limit the pain the American people are feeling at the gas pump," he said.

Biden went on to say that "There's no question that Russia is the aggressor. We we're clear-eyed about the challenges we're facing. Nonetheless, there's still time to avert the worst case scenario that will bring untold suffering to millions of people if they move as suggested." He also said that the US and her "allies and partners remain open to diplomacy."

Biden left the room without taking questions from reporters.