BREAKING: Elon Musk calls out Fauci — 'He lied to Congress and funded gain-of-function research that killed millions of people'

Elon Musk came out swinging at Anthony Fauci Sunday night with an epic tweet accusing the Covid czar of lying to Congress and funding gain-of-function research that killed millions of people. 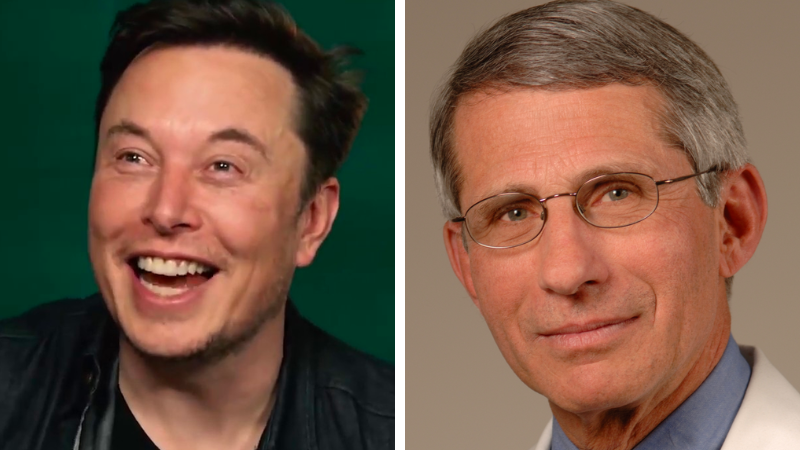 The tweet was in response to woke astronaut Mark Kelly who tweeted: ".@elonmusk Elon, please don’t mock and promote hate toward already marginalized and at-risk-of-violence members of the #LGBTQ+ community. They are real people with real feelings. Furthermore, Dr Fauci is a dedicated public servant whose sole motivation was saving lives."

"I strongly disagree. Forcing your pronouns upon others when they didn’t ask, and implicitly ostracizing those who don’t, is neither good nor kind to anyone. As for Fauci, he lied to Congress and funded gain-of-function research that killed millions of people. Not awesome imo," Musk replied, setting the internet ablaze.

Earlier today Musk tweeted out "My pronouns are Prosecute/Fauci" leading many to speculate that there will be a component of the Twitter files that will focus on Covid and Fauci's role in funding gain-of-function, research, lying to congress, and keeping Americans locked down. Mark Kelly's breathless tweet was in response to this.

Republican Senator Rand Paul from Kentucky has pledged to investigate Fauci over Covid. The two men have clashed on several occasions; Paul claims Fauci lied to Congress multiple times, specifically about possibility that Covid was man-made, and his role in funding gain-of-function research.

Missouri Attorney General Eric Schmitt released to Twitter on Monday the full transcription of Fauci’s deposition in the ongoing case regarding social media censorship, in which it was revealed that Fauci's daughter worked for Twitter during the pandemic, and that Fauci was against masks before he was for them.
ADVERTISEMENT
ADVERTISEMENT
fauci elon