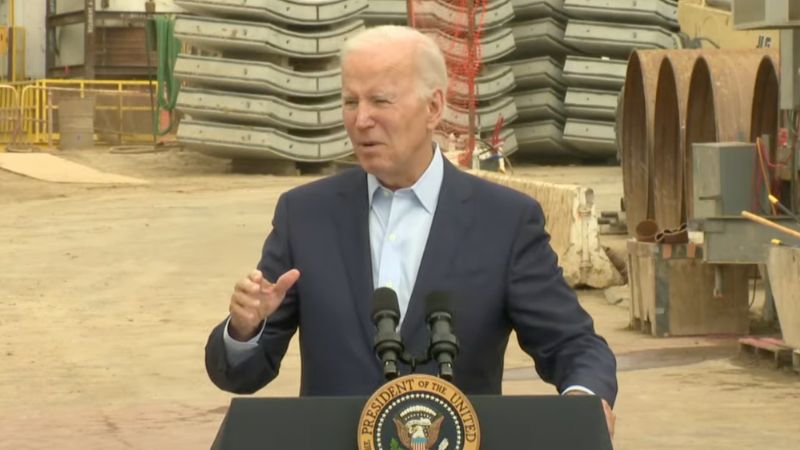 New whistleblower documents obtained by Senator Chuck Grassley have revealed that President Biden "was aware of Hunter Biden’s business arrangements and may have been involved in some of them."

On Monday morning, Grassley sent a letter to Attorney General Merrick Garland, FBI Director Christopher Wray, and US Attorney for Delaware David Weiss outlining new whistleblower allegations that claim the FBI has "significant, impactful and voluminous evidence with respect to potential criminal conduct by Hunter Biden and James Biden," according to Fox News.


The whistleblowers allege that the FBI has documents relating to information on Mykola Zlochevsky, who is the owner of Burisma Holdings, where Hunter Biden sat on the board.

"These documents also indicate that Joe Biden was aware of Hunter Biden’s business arrangements and may have been involved in some of them," Grassley said.

The Senator added that it is "unclear whether the FBI followed normal investigative procedure to determine the truth and accuracy of the information or shut down investigative activity based on improper disinformation claims in advance of the 2020 election."

"It is also unclear whether US Attorney Weiss has performed his own due diligence on these and related allegations," Grassley continued.

Grassley, alongside Senator Ron Johnson, led an investigation into Hunter Biden starting in 2019, which discovered that officials within the Obama administration "knew" of Hunter Biden’s "problematic" position on the board, saying that it interfered "in the efficient execution of policy with respect to Ukraine."

Hunter Biden joined the board in April of 2014, while his father was serving as vice president and running US-Ukraine relations and policy for the administration.

Additionally, Grassley noted an FBI interview with Tony Bobulinski, Hunter Biden’s ex-business partner, from October 2020, where he stated that Hunter Biden and his uncle, James Biden, had created a business agreement with foreign nationals connected to the Chinese government during Biden’s vice presidency.

"After Joe Biden left the vice presidency, the summary makes clear that Hunter Biden and James Biden worked with CEFC and affiliated individuals to compensate them for that past work and benefits they procured for CEFC," Grassley said.

Hunter Biden, James Biden, and their business partners created a joint venture, known as SinoHawk Holdings, that would be a "vehicle to accomplish that financial compensation."

the venture was a partnership between the two Bidens, and CEFC Chairman Ye Jianming. 50 percent of SinoHawk was owned by Oneida Holdings, which according to the summary, was made up of five evenly divided LLCs, two of which went to Hunter and James Biden, and 10 percent, Bobulinski revealed, was "to be held for Joe Biden."

Grassley said that the FBI "has a document within its possession that notes that then former Vice President Joe Biden met with Hunter Biden and his business associates at a conference in Los Angeles on May 2, 2017 and May 3, 2017."

According to Fox News, this conference was the Milken 2017 Global Conference, held in part at the Beverly Hilton Hotel.

Biden spoke on May 3, 2017 at the conference, holding a "Conversation with the 47th Vice President of the United States."

Text messages between Bobulinski and Hunter Biden, as well as James Biden, showed that the group had met, but the White House has declined to state whether President Biden met with Bobulinski.

In his letter, Grassley said that those meetings "have been publicly disclosed; however, the fact that the FBI maintains documents referencing these data points has not been made public before."

Based on the whistleblower allegations, Grassley said that Bobulinski's interview established a "sufficient basis to open a full field investigation on pay-to-play grounds," but added that it is unclear whether the FBI has done so, or if the information is being used in an ongoing criminal investigation by Weiss.

Grassley wrote that both the Justice Department and FBI "have not disputed the accuracy of the allegations."

"The Justice Department’s and FBI’s continued silence on these matters is deafening and further erodes their credibility," Grassley wrote. "Simply put, enough is enough – the Justice Department and FBI must come clean to Congress and the American people with respect to the steps they have taken, or failed to take, relating to the Hunter Biden investigation."