Following the shocking photos of a group dressed as "white supremacists" during a Youngkin campaign stop, the McAuliffe campaign has condemned the actions, despite spreading the hoax themselves all day. 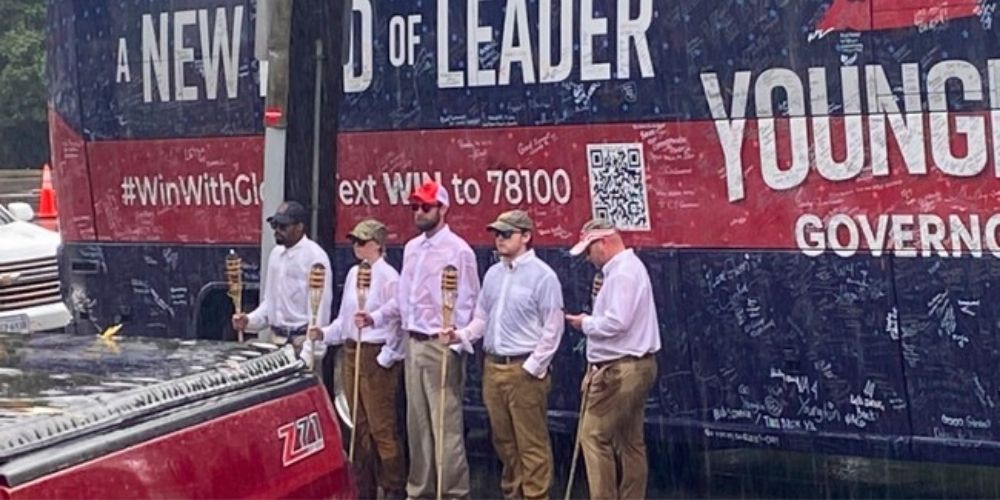 Following the shocking photos of a group dressed as "white supremacists" during a Glenn Youngkin campaign stop in Charlottesville, Virginia, the Terry McAuliffe campaign has condemned the actions, despite spreading the hoax themselves all day.

The stunt was revealed to be the actions of the Lincoln Project, using Virginia Democrats workers.

“What happened today is disgusting and distasteful and we condemn it in the strongest terms. Those involved should immediately apologize,” McAuliffe's campaign manager Chris Bolling told senior Vice News reporter Cameron Joseph.

"The Democratic Party of Virginia, along with its coordinated partners and its affiliates, did not have any role in the events that happened outside of the Youngkin campaign bus stop today," another statement from the campaign reads.

"What happened in Charlottesville four years ago was a tragedy and one of the darkest moments in our state's recent memories and is an event not to be taken lightly," the McAuliffe statement continued. "For anyone to accuse our staff to have a role in this event is shameful and wrong," the statement continued.

Despite the disgust expressed by the campaign regarding the hoax, McAuliffe's campaign members spread said hoax across social media. Youngkin, on the other hand, saw through the stunt, though pointing his finger at the wrong culprit.

When asked about Friday's incident, Youngkin told NBC 29 in a press statement, "I think they work for Terry McAuliffe, and I'm sure he sent them. They'll do anything to win, and he's doing anything to win, and so he's paying people to show up and act silly at our rallies."

"Wow. At a campaign stop for Glen Youngkin this morning, people were holding tiki torches and chanting "we're all in for Glenn," wrote  McAuliffe campaign social media manager Charlie Olaf. That tweet has since been deleted.

"Disgusting reference to the 2017 Unite the Right Rally in Charlottesville," he continued.

"The Unite the Right rally was one of the darkest days in the Commonwealth’s history. This is who Glenn Youngkin's supporters are," wrote Christina Freundlich.

This is disgusting and disqualifying," wrote Jen Goodman.

Representative Eric Swalwell weighed in on the stunt, writing "Birds of a feather."

Lauren Windsor acknowledged her hand in the incident, working in collaboration with the Lincoln Project.

"In my capacity as a communications consultant, I worked w @ProjectLincoln to coordinate today's Youngkin action in Charlottesville. I join them in the fight to defend our democracy from rightwing extremists and call for Glenn Youngkin to denounce Trump's 'very fine people."

"We will continue to hold Glenn Youngkin accountable. If he will denounce Trump’s assertion that the Charlottesville rioters possessed 'very fine' qualities, we’ll withdraw the tiki torches. Until then, we’ll be back," wrote the Lincoln Project in a statement regarding the photos.