"I just keep trying to disrupt wherever I can," Norris said. "And now that I’m in this position, I have so many opportunities to do that." 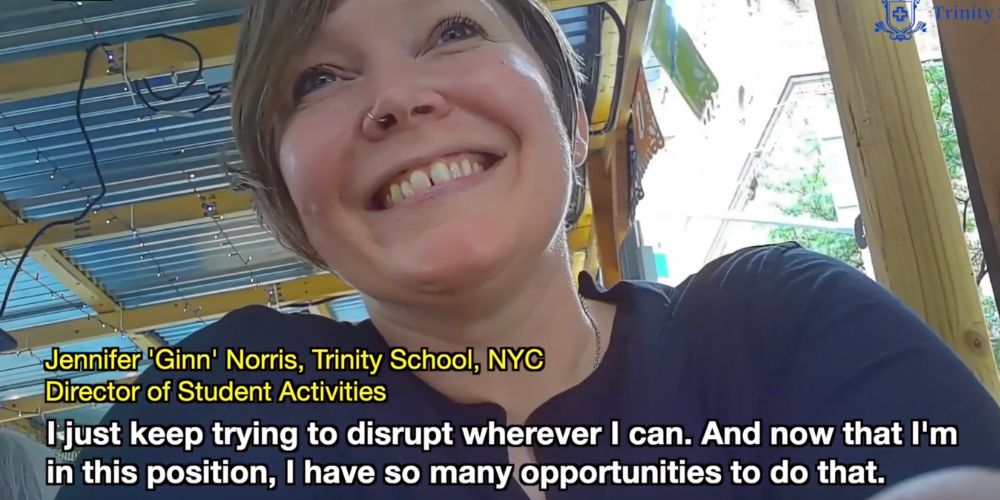 On Wednesday, Project Veritas released a video containing an undercover conversation with a student director at New York City’s Trinity School, where the female teacher unveiled how she and other teachers at the school inject activism into their teachings.

Jennifer 'Gina' Norris, Director of Student Activities at the Trinity School in New York City, was seen boasting about her teachings to the undercover Project Veritas journalist.

The Trinity School, which Norris described as "a really fancy private school up on the Upper West Side" that's "definitely a school where conservatives would not feel comfortable," serves kids in grades K-12, and for the 2022-23 school year costs $58,385 for grades K-8, and $58,495 for grades 9-12 per year.

Norris told the journalist that "I don’t hide how I feel, but I can’t pretend I’m [not] promoting an agenda even though I clearly am with all the stuff I’m doing."

"But when I first started there I hid my whole life. I felt like a double agent or something," she added.

The conversation continued on with Norris stating that she's "afraid" of her rich, white students, adding that some of the white boys in her school are "horrible."

"Unfortunately, it’s the white boys who feel very entitled to express their opposite opinions and just push back. There’s a huge contingent of them that are just, like, horrible. And you’re like, 'Are you always going to be horrible, or are you just going to be horrible right now?' Don’t know… I think they need to go. I think they’re really awful people… They’re so protected by capitalism. It makes me sad." said Norris. "I think they’re really awful people. That’s kind of what I’m afraid of with my white students that are rich."

At another point in the conversation, Norris asked the journalist about the show Dexter, a crime show centered around a main character who moonlights as a vigilante serial killer.

"You know the show Dexter?" Norris asked, to which the journalist said yes. "We just need some vigilante Dexter... Like, here’s your community of targets."

The journalist continued on to ask, "so you guys wouldn’t let Republican perspectives on campus?"

Norris is seen shaking her head, and said, "I won't."

Norris said that with a new administration that is more liberal leaning, she and others haven't had to hide their activism efforts outside of school hours, even bringing their activism inside the classroom in the form of bringing children to activist marches.

"The administration was much more conservative than most of us," she later added. "There’s always groups of teachers who want to do these [activist] things, but the administration just wouldn’t let us. So we’ve been just sneaking things in, in the cracks."

Norris said that she is friends with the associate head of school, a former English teacher, saying that "I go and talk to her all the time and she has been amazing. She really cares and has the power to change things. So I feel like I finally have an in to get it [her agenda]."

Norris also recounted telling students about speaker voting options, and admitted to the journalist that there were voting options that she would not put them "on the plate" for the students to consider.

"I talked to the principal and I was like, 'So if I’m running this, I’m 100 percent democratic with my students. I will tell them the [speaker] options and they are voting.' I’m not going to just be like, 'These are our speakers for the year.' I want to make sure the kids are engaged and care. So, I do put a lot of it on them, but I said, 'There are some speakers I am not even going to put on the plate for them [students], and if that’s a problem, I cannot be in charge of that.' And he [principal] was like, 'No.' He said, 'This isn’t the time for both [political] sides.' He said, 'We’re not in that place in our society."

"With my role, I give them all the art supplies, they can put posters together. We have people that go to every march. They get excused from classes, or..." Norris said, before the journalist asked which marches they attend.

"They went to the women’s rights marches after Trump. They went to all the gun ones, the March For Our Lives," said Norris. "It’s fun, too, because if they do march out of school, because sometimes it’s a political protest, so we don’t actually give them a grace period. But we do. We don’t punish them, but if they do it, then they have to serve detention. And then during detention, we talk about social justice."

"So it’s like the punishment of detention, but it’s not punishment at all," she added.

"I just keep trying to disrupt wherever I can," Norris said. "And now that I’m in this position, I have so many opportunities to do that."

This latest video from Project Veritas comes hot on the heels on one released on Tuesday, in which they revealed that the Assistant Principal at Cos Cob Elementary School discriminates against potential new hires that are older in age, conservative, or Catholic, and showed the school official boasting about similar injections of activism and liberal thinking in the classroom.

The assistant principal, Jeremy Boland, has since been placed on leave, and the school district has announced that they will be launching an investigation into Boland for breeches of Connecticut's state laws regarding discriminatory hiring practices.