Photos have surfaced on social media depicting "white supremacists" at a Glenn Youngkin campaign stop in Charlottesville, Virginia, which were revealed to be members of the Virginia Democrats. 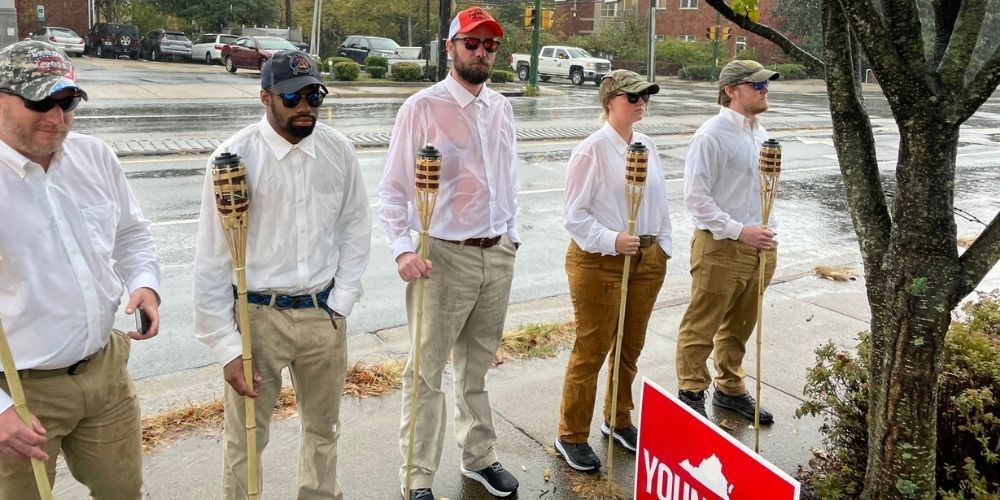 Update: The Lincoln Project has since taken responsibility for the tiki torch hoax.

Photos have surfaced on social media depicting "white supremacists" at a Glenn Youngkin campaign stop in Charlottesville, Virginia, which were revealed to be members of the Virginia Democrats.

A group of people were photographed outside the Republican gubernatorial candidate's bus dressed in khakis, white button up shirts, baseball caps, and holding tiki torches, which were prominently seen during the tragic events that unfolded during a white supremacist rally in the city in 2017.

The group was first spotted outside Youngkin's election campaign event at a Mexican restaurant by NBC 29 reporter Elizabeth Holmes.

Twitter users were quick to start digging into the identities of those who appeared as part of this group.

A Twitter user going by "Jewish Deplorable" uncovered the identity of one of the group, who was revealed to have been the finance director of the Virginia Young Democrats, and part of the Virginia Democrats at George Mason University.

After having allegations thrown against him, Camden Layton, the man identified, then locked all his social media as a response.

Alec Sears then identified the sole female member of the group as Colleen Wachenfeld. Her twitter originally stated that she is part of the Virginia Democrats.

Since then, her account has changed appearance many times, including numerous changes to profile photos, and changes to her username and display name.

When asked about Friday's incident, Youngkin told NBC 29 in a press statement:

Jen Goodman, a communications director for the McAuliffe campaign initially promoted the stunt, saying on Twitter: "This is disgusting and disqualifying."

McAuliffe's campaign has denied their role in the group's appearance, stating: "The Democratic Party of Virginia, along with its coordinated partners and its affiliates, did not have any role in the events that happened outside of the Youngkin campaign bus stop today."

"What happened in Charlottesville four years ago was a tragedy and one of the darkest moments in our state's recent memories and is an event not to be taken lightly," the McAuliffe statement continued. "For anyone to accuse our staff to have a role in this event is shameful and wrong."