BREAKING: 'Treehouse Antifa' calls for 'Night of Rage' on Jan 20 after cop shoots militant dead outside Atlanta in gunfight

"On Friday, January 20th, wherever you are, you are invited to participate in a night of rage in order to honor the memory of our fallen comrade." 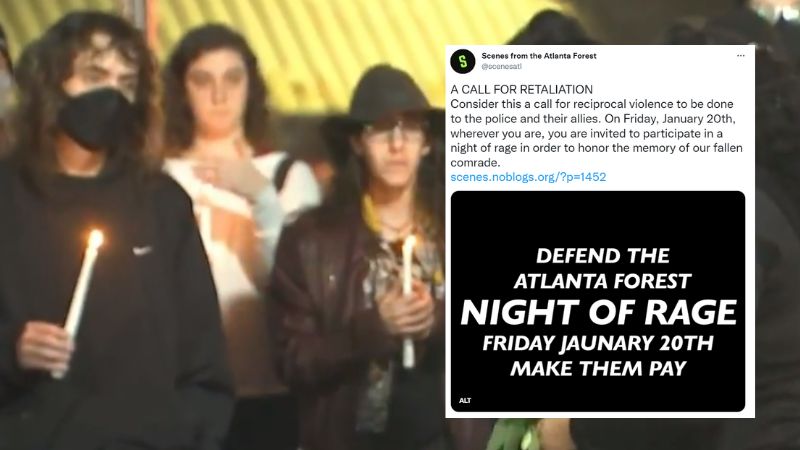 The Post Millennial
Jan 18, 2023 minute read
ADVERTISEMENT
ADVERTISEMENT
Radical Antifa-associated leftists are calling for retaliation after one of their grunts was killed in an incident with police, near the "Cop City" occupying grounds where the Atlanta Police Department Training Facility is set to be built.

"Consider this a call for reciprocal violence to be done to the police and their allies. On Friday, January 20th, wherever you are, you are invited to participate in a night of rage in order to honor the memory of our fallen comrade," the Scenes from the Atlanta Forest Twitter account tweeted.

The Antifa activists have been dubbed "Treehouse Antifa" and took to the streets on Wednesday night at Little Five Points in Atlanta, and began throwing scooters. They had been holding a vigil for their fallen comrade.

Local journalist Cody Alcorn reported that "Forest Defenders holding vigil tonight in Little Five Points after person was killed inside forest dubbed ‘Cop City.’ A state trooper was shot & is in ICU. Man I talked to said protestors are still in trees rn and have no intentions of leaving unless training facility is nixed."

The shooting took place during a "clearing operation" at around 10 am near an Antifa-linked autonomous zone, where six were charged last month.

Georgia Department of Public Safety Colonel Chris Wright said that protestors fired a shot and hit an officer, to which officers fired back. The suspect was killed. The officer is in stable condition. The identity of the trooper and the man involved have not been revealed.

The Georgia Department of Public Safety tweeted at the time of the incident, "There is an active incident on Constitution Road in Atlanta, in which a Trooper was shot. We will provide further information once available." The Georgia Bureau of Investigation also stated that they were investigating the incident.

State Governor Brian P. Kemp tweeted, "Marty, the girls, and I are praying for this brave Trooper and public safety officers across all law enforcement agencies today.

"As our thoughts remain with him and his family, our resolve also remains steadfast and strong to see criminals brought to justice."