BREAKING: Twitter censors Florida Surgeon General for his guidance to men ages 18-39 to not get Covid vaccine

Florida Surgeon General Joseph Ladapo advised men in that age group not to get the Covid vaccine as it was found to cause an 84 percent increase in that demographic. 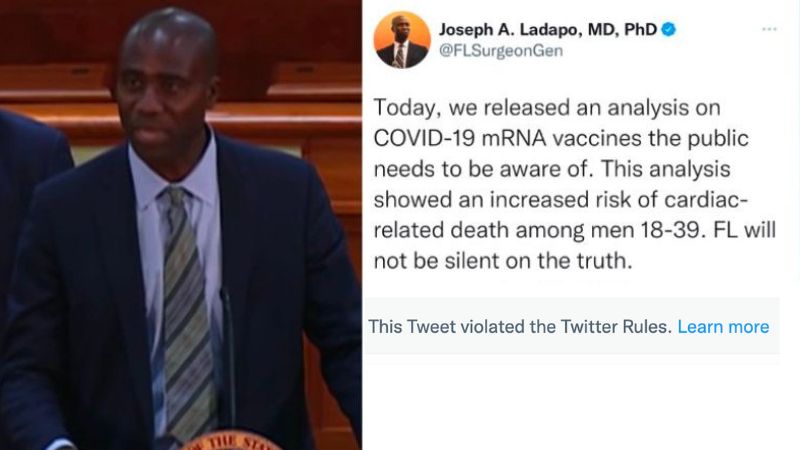 Florida Surgeon General Joseph Ladapo has been censored by Twitter on Sunday over his tweet yesterday advising men between the ages of 18-39 not to get the Covid vaccine as it was found to cause an 84 percent increase in death for that age group.

Disclose.tv posted the news on Twitter, "JUST IN - Twitter has removed a tweet from Florida Surgeon General Dr. Joseph Ladapo about mRNA vaccines for violating the platform's rules."

On Friday, Ladapo released the state's analysis of COVID-19 mRNA vaccines, revealing an 84 percent "increased risk of cardiac-related death among men 18-39." Florida "will not be silent on the truth," he said.

The guidance "recommends against the COVID-19 mRNA vaccines for males ages 18-39 years old." In a statement, Ladapo said that "Studying the safety and efficacy of any medications, including vaccines, is an important component of public health. Far less attention has been paid to safety and the concerns of many individuals have been dismissed – these are important findings that should be communicated to Floridians."

The Florida Department of Health released the findings of a self-controlled case series which they used to evaluate the safety of the Covid vaccines, which "studied mortality risk following mRNA COVID-19 vaccination."

It found that "there is an 84% increase in the relative incidence of cardiac-related death among males 18-39 years old within 28 days following mRNA vaccination."