Just last week Agrawal tweeted he was "excited" that Musk would join Twitter's board after it was revealed that Musk bought a 9.2 percent stake in the company and in doing so became its largest shareholder. 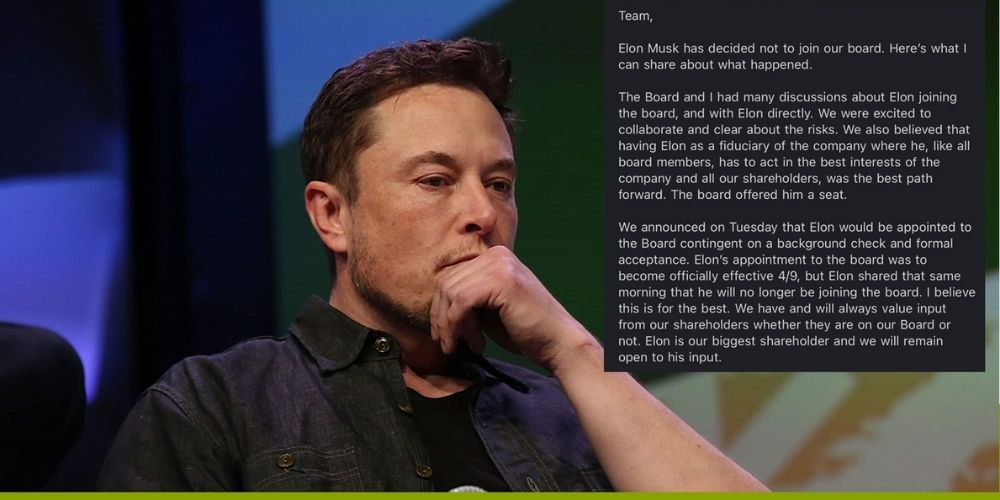 Parag Agrawal, CEO of Twitter, announced on the platform Sunday night that Elon Musk "has decided not to join" the tech giant’s board of directors.

In the announcement Agrawal said, "The Board and I had many disucssions about Elon joining the board, and with Elon directly. We were excited to collaborate and clear about the risks. We also believed that having Elon as a fiduciary of the company where he, like all board members, has to act in the best interests of the company and all our shareholders, was the best path forward."

In response to the announcement, Must posted a simple emoji.

According to the announcement, Musk's appointment to the board was effective April 9. However, that morning he informed Agrawal that he would not be joining the board. Agrawal wrote, "I believe this is for the best."

Just last week Agrawal tweeted he was "excited" that Musk would join Twitter's board after it was revealed that Musk bought a 9.2 percent stake in the company, and in doing so became its largest shareholder.

Since the news of Musk's stake was revealed, the Tesla CEO has been tweeting various polls gauging users interest in ideas regarding the platform including an edit feature, banning ads and offering the option to pay in cryptocurrency.

Musk also suggested converting Twitter's San Francisco HQ into a homeless shelter "...since no one shows up anyway."