"And you know, that the Russian aggression was never intended to restrict itself to the Ukrainian borders," she said. 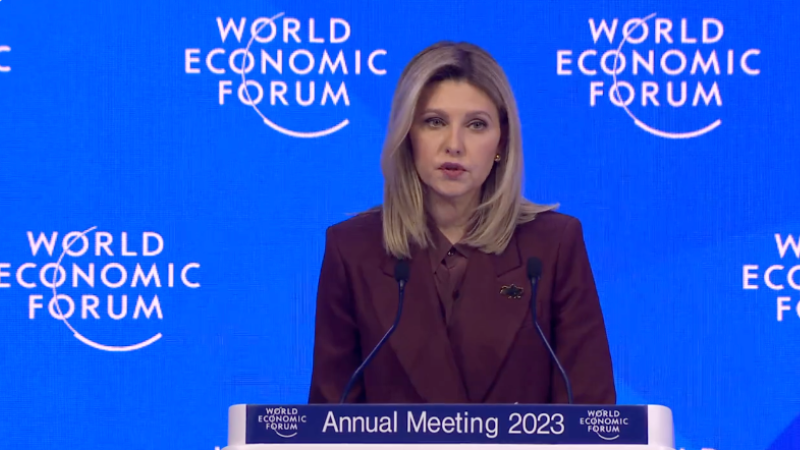 Libby Emmons Brooklyn NY
Jan 17, 2023 minute read
ADVERTISEMENT
ADVERTISEMENT
The World Economic Forum, gathering for their Annual Meeting this week in Davos, Switzerland, hosted First Lady of Ukraine Olena Zelenska. She described the horrors of war, and criticized the WEF for looking to "achieve climate neutrality," while being unable to have "stopped the burning of entire cities in Ukraine."

Zelenska said that the Russian aggression was neither designed to stay within the borders of Ukraine, nor would it stay there. She said that the "guaranteed cessation of hostility and terror by the occupiers against Ukrainians... will restore the force of international law and the UN Charter..."

"And you know, that the Russian aggression was never intended to restrict itself to the Ukrainian borders," she said. "This war can go further and it makes the crisis wider if the aggressor does not lose. In other words, if the sum of our influence does not outweigh the aggression.

"Ladies and gentlemen," she continued, "my husband, the President of Ukraine, when he addressed the leaders of 19 states who are economically the most powerful, offered down unto the whole world, the formula about how we can become the most powerful in peacekeeping."

Zelensky recently spoke to the US Congress, where he received a standing ovation, and both Vice President Kamala Harris and former House Speaker Nancy Pelosi raised the flag of Ukraine over that sovereign legislative body.

She addressed the 10-point plan, which includes restoring security around nuclear plant Zaporizhia, protecting grain exports, bringing back Ukraine's power grid, the release of "all prisoners and deportees, including war prisoners and children deported to Russia," restoring Ukraine's sovereign borders, the immediate withdrawal of all Russian troops, a tribunal to prosecute Russian war crimes, environmental protections, security guarantees by European partners for Ukraine, and a "confirmation of the war’s end, including a document signed by the involved parties."

With this plan, Zelenska said, the world can "prevent existing regional global crisis from converging into one full scale, full on global crisis." After detailing the personal, human impact of the war on families and children, she asked attendees at the Annual Meeting to "look at the need to stop this regression exactly like this was the eyes of the people whose lives have been brought into chaos by the aggressor country."

For Zelenska, the "most painful part of the formula" is the need to release those who were deported to Russia back to Ukraine. Among these, she said, are "thousands of children that we must protect from the dissolution of their bond with their motherland."

"Unity is what brings peace back," Zelenska said.

On behalf of Ukraine, she brought a letter to Chinese leader Xi Jinping to ask for that nation's help in obtaining peace. Xi has been seen meeting with Russian President Vladimir Putin. While Russia is engaged in armed conflict to take back territory in Ukraine, China has been putting on a show of force near the island of Taiwan, which it has indicated it would bring back under the umbrella of mainland, Chinese control, against the stated wishes of that nation.
ADVERTISEMENT
ADVERTISEMENT
zelenska wef