Calgary convict gets life sentence for murder of teenager

Lukas Strasser-Hird (18) was severely beaten and stabbed to death outside a nightclub in 2013. His murderer, Nathan Gervais (24), who fled from Calgary to Vietnam to avoid trial, has been sentenced to life imprisonment. 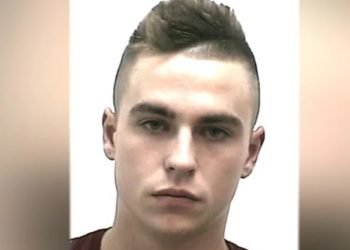 Lukas Strasser-Hird (18) was severely beaten and stabbed to death outside a nightclub in 2013. His murderer, Nathan Gervais (24), who fled from Calgary to Vietnam to avoid trial, has been sentenced to life imprisonment.

According to CBC, Gervais was convicted of first-degree murder, and was one of the assailants who killed Lukas in 2013. Lukas was defending a nightclub employee against whom Gervais’s friends had made a racist remark; Lukas was subsequently surrounded and shoved to the front of the club before bouncers helped him escape from the back.

Meanwhile, Gervais’s friends Franz Cabrera, Assmar Shlah and Joch Pouk were waiting in the alley behind the bar. Lukas was subsequently kicked, punched, and stabbed to death while begging for his life. The attackers fled, and bystanders called 911, but Lukas died shortly after reaching the hospital.

Gervais escaped to Vietnam in 2016 just weeks before he was to be tried. His friends Cabrera and Shlah were convicted of second-degree murder; Pouk was found guilty of manslaughter. Gervais was arrested and extradited to Calgary to his his charges.

The Alberta Court of Appeal upheld Cabrera and Shlah’s appeals for a new trial; Pouk did not appeal. Gervais was given the life imprisonment sentence.