Calling for intifada is hate speech, not free speech 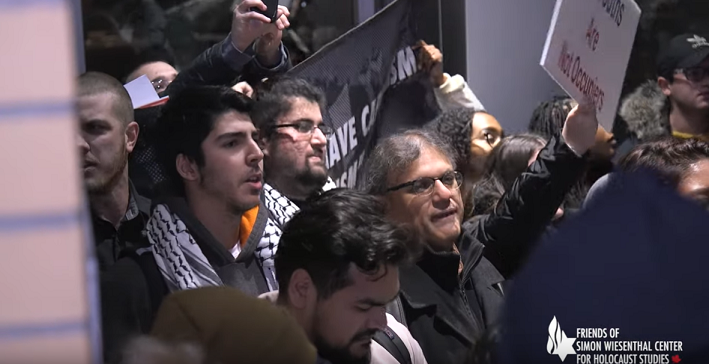 Daniel Koren is the director of Hasbara Fellowships Canada, an organization that empowers student leaders to fight against anti-Israel and antisemitic discrimination on campus.

In an opinion piece titled “Free Speech, but not for Palestine” published in the Toronto Sun on Nov. 28, two anti-Israel activists (one of whom is known for his anti-Israel activism at York University) suggest there is nothing wrong with calling for an intifada on campus.

As the director of Hasbara Fellowships Canada, which empowers student leaders to fight against anti-Israel and antisemitic discrimination on campus, I strongly disagree.

In their op-ed, Hammam Farah, a York alumnus and founder of the university’s Students Against Israeli Apartheid (SAIA) club, and Mona Dennaoui, a former member of SAIA, suggest they were bullied by members of the Jewish Defence League (JDL) and other Jewish counter-protestors at the now infamous York rally on Nov. 20.

This, despite the fact that, according to most accounts, Jewish protestors were outnumbered by anti-Israel demonstrators by at least six to one.

Astonishingly, referring to members of the JDL (known for their hawkish position on the Arab-Israeli conflict) as “snowflakes” isn’t the most ludicrous comment in Farrah and Dennaoui’s op-ed.

No, what’s most absurd is that they suggest there is no free speech for Palestine at a campus known for its hostility towards Jews and pro-Israel students, a campus notorious for a vulgar and violent mural that Jews have for years demanded be removed, a campus where even uttering the words “Israel” or “Zionism” can result in harassment and discrimination.

Farrah and Dennaoui are right about at least one thing, though: the importance of freedom of speech on Canadian college and university campuses. What they fail to articulate is that chanting “Viva, viva intifada!” is not free speech. In my view, it’s hate speech.

But please, don’t take my word for it.

Take the word of Adele Banita-Bennett, whose 22-year-old husband Aharon was stabbed to death in the name of intifada as Adele, their two-year-old daughter, and infant baby watched in horror.

Or, to illustrate why the Palestinian Roots mural promotes violence against Jews, take the word of Yosefa or Maya Levlovich, who were in the car with their father Alexander when Palestinians hurled rocks at their car, forcing it to crash. Alexander, now known as the first victim of the “Stabbing Intifada” of 2015-16, died in hospital the next day.

Or take the word of any of the relatives of the victims of the October, 2015 Jerusalem bus attack, where three Israelis were killed and 16 others were wounded in the name of intifada.

I can go on and on. This is the real face of intifada, and not just to the Jewish- and Arab-Israelis who have been mercilessly attacked in cold blood, but to anyone who has been paying attention.

When a small number of Jews are subject to chants of “Viva, Viva Intifada!” from a much larger group, that’s not just some innocuous saying to us. It’s a call for a violent uprising of knife stabbings, car rammings, and suicide attacks, not “peaceful resistance,” as many anti-Israel activists have suggested. It’s a horrific promotion of murder and genocide.

But to imply that this term can mean anything else but violence and murder is to assume it is subject to interpretation when it is not. These examples are indisputable facts concerning hundreds of innocent Israelis, Jewish and Muslim alike, murdered in the name of intifada.

It is the height of hypocrisy that Hammam Farah, who has personally attempted to silence oh so many Jewish- and Israeli-Canadians, claims to be interested in preserving freedom of speech. If he were, then that freedom would have to be awarded to all people, even those he disagrees with.

Following the rally at York, some of the IDF soldiers who spoke said it was unfortunate not a single anti-Israel protestor would give them the chance to start a dialogue that could lead to interfaith building. Instead, they were just trying to shut them down. As the founder of SAIA York, who organized the rally, this is Hammam Farah’s legacy.

Sadly, if anyone is guilty of denying freedom of speech and expression, it is the anti-Israel activists at York, U of T, McGill and other campuses around the world where Jews are being told what they can and cannot do or say. Or am I just being a snowflake?