Duffield made the comment at the LGB Alliance conference in London when questioned about the possibility of misgendering becoming a hate crime.  "Is that a serious thing? Is that coming to Parliament any time soon? I hope not because you might as well arrest me now. I'm not calling Eddie Izzard a woman." 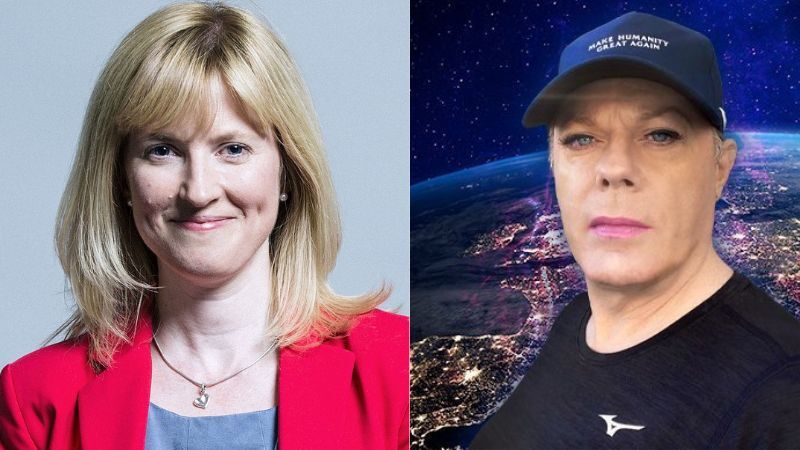 British MP Rosie Duffield is once again facing calls for her expulsion from the Labour Party after stating that she refuses to call male comedian Eddie Izzard a woman.

Izzard, who when in 'girl mode' likes people to use she/her pronouns, is currently standing to be the next Labour MP for Sheffield.


According to The Daily Mail, Duffield made the comment at the LGB Alliance conference in London last Friday, when questioned about the possibility of misgendering becoming a hate crime.

"Is that a serious thing? Is that coming to Parliament any time soon? I hope not because you might as well arrest me now. I'm not calling Eddie Izzard a woman," said Duffield.

This comment led to calls from Labour party members for Keir Starmer to "remove the whip," a term which means an MP is expelled from the party but still keeps their seat in Parliament as an independent.

"She has got to join the 21st century," Izzard told The Guardian with regards to Duffield's comment. "She's got to catch up with the rest of us. The vast majority of the world is now moving forwards ... The millennium has happened and we're 22 years into it. So come and join us in the 21st century."

"Instead of being indulged while ranting on about how behind the times other people are, Eddie Izzard really needs to be challenged on just how up-to-date 'women are high heels and dresses' is," feminist Victoria Smith astutely retorted in a tweet.

Izzard had a long career in the stand-up comedy scene, and throughout the 90s did not claim to be a woman. In fact, in response to being asked about wearing women's clothes, Izzard once famously quipped "they're not women's clothes. They're mine. I bought them.".

But all that changed with the dawn of the modern trans rights movement after the concept of gender identity was introduced. Izzard started to talk about being in "girl mode" and then later announced the desire to be referred to with she/her pronouns, although stressed it was a request, not a demand.

Izzard has told the story of being chased out of a women's bathroom by a group of teenage girls, in which Izzard paints the girls as being the villain in the story, leading some to suggest this makes Izzard an unfit candidate to run for MP.

This is not the first time Duffield's comments on women's rights and trans rights have got her in trouble with activist members of her own party.

The MP for Canterbury faced backlash in 2020 when she tweeted that "only women have a cervix," a comment for which she was forced to apologize.

As a result of this incident, Duffield was unable to attend the 2021 Labour Party Conference due to threats to her safety.

Duffield, however, has remained steadfast in her opposition to the erosion of women's rights in the name of trans rights. Like JK Rowling, who also faces enormous backlash for her stance on the importance of female-only spaces, Duffield is a survivor of domestic violence. In 2019, she gave a powerful speech in the House of Commons about her own experience.