“It’s because there are more people there, and they’re starting fires.” 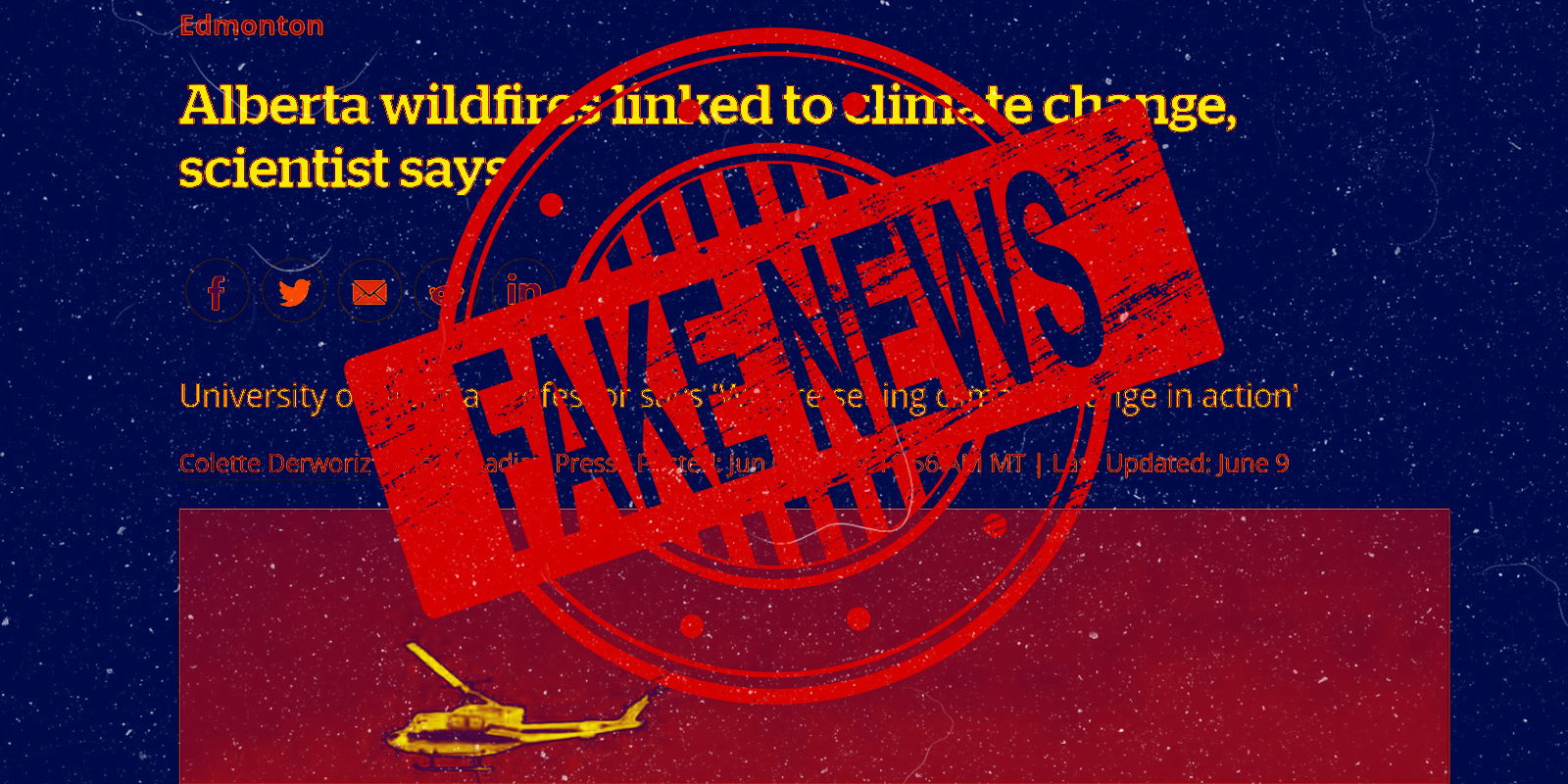 Amidst calls for proactive measures on the global “climate crisis”, 11,258 scientists from 153 nations agreed with the findings in a recent BioScience publication. They warn of “untold suffering due to the climate crisis”.

Unless we commit to reproducing less, “transition” from fossil fuels, cut meat from our diets and end deforestation, the effects will only worsen, according to the publication.

The Liberal Party dogma echoes these sentiments. From using Inuit Canadians as props to giving fictitious sympathies to the prairies (having labelled them as “climate change deniers” in the past), the false moral platitudes undermine attempts for rational discourse.

When that discourse sours to the received wisdom being beyond reproach, and media mix education with indoctrination, society suffers as a result.

Like health care, education, and yes, even climate change, contentious issues such as these require honest debate, realistic goals, and a plan to achieve said policy aims. Combating climate change can occur without alienating large swaths of the population or moving to “phase out” entire industries.

While it is no secret that Albertans are the least receptive to coercive climate action, the backlash from a recent poll demonstrates how divisive mere inquiry can be. Suggesting an alternative to the carbon tax even constitutes the label of climate change denier.

Therefore, if it is true that “Scientists have a moral obligation…to ‘tell it like it is’, then, perhaps, the demonizing of one’s opponents, as the political left often does, is not how we save the world from the pending apocalypse.

Effectively, the climate change issue has become a means by which tragedy is politicized, opponents mischaracterized, and the genuine need to educate gone with the wind. It’s all about centralized control, increased taxation, and not the freedom to choose.

The recent High Level fire was not caused by climate change, but arson

Despite the fires still raging, the CBC article began by spinning the story in service of the climate change narrative, before the smoke had settled and the cause of the fire was even established.

We now know from the release of the RCMP’s investigation that the largest of the fires around Chuckegg Creek and High Level were caused by arson, something that was made public on Oct. 22.

Of course, climate change will result in more wildfires. Nobody would contend that warmer weather makes for drier conditions, but in this case, the reporting was dishonest. Emphasizing a single factor without acknowledging other causes, including arson, was irresponsible.

The premier’s response at the time included the need for more context as to why this fire season may be worse than others, including but not limited to climate change.

“‘I accept the science on anthropogenic climate change,’ Kenney said in a news conference. “But, in this particular instance, I can tell you we are on the five-year average for forest fires in Alberta… The large one right now is happening in an area where there has not been a fire for 80 years, and so, regardless of other factors, it was due eventually for a large wildfire.’”

In our interview with the CP reporter, she said, “Kenney’s comments aren’t wrong, but fire scientists say they don’t tell the whole story,” which is ironic, given the original story included misleading quotes from the scientist she interviewed.

It all seemed quite strange that the quotes from Dr. Mike Flannigan, who has a Ph.D. in Plant Sciences, and who specializes in fire’s interaction with climate, would give such a lopsided take on the northern Alberta wildfires. His quotes, peppered throughout the article, read like climate change propaganda, which, now having talked to him, are deeply misrepresentative of his views.

A quote like “We are seeing climate change in action,” makes it sound like Dr. Flannigan is speaking on the northern Alberta wildfires, and like other quotes, are lacking in context, suspiciously short, and do not reflect something a respected environmental scientist would claim while a wildfire is still burning.

When we called Dr. Flannigan to ask why he seemingly had attributed the fires solely to the increased risks from climate change, the ensuing discussions pointed our concerns back to Derworiz’s piece that the all-too-credulous CBC published because it fit the public broadcaster’s confirmation bias.

Upon questioning him, it was soon evident that Dr. Flannigan is very detailed in the way he handles the issue of forest fires. The quotes included were tailored down to meet the CP’s and CBC’s climate change narrative.

As Dr. Flannigan put it:

“Media like sound bites of ten to thirty seconds, where, unfortunately, you can’t get into all that you know, but you try and hammer home the major points and often I do try. But it doesn’t always make it because things get cut, that the amount of human activity in northern Alberta has increased significantly. And so we’re seeing more impact because more people are living and working in the forest as compared to 40 years ago. So that’s why we’re seeing more Chuckegg Creeks, Slave Lakes, and Fort McMurray. It’s because there are more people there, and they’re starting fires.”  Dr. Flannigan

When we followed up with the CP reporter to question the editorializing in her news article, she said it was unfair to expect her to get the cause of the fire correct as she had less information when she wrote the article. This misses the point entirely.

The issue is that CP wrote a story about the northern Alberta wildfires and linked them to climate change before having all of the evidence. Even if the cause of the major fires around Chuckegg Creek and High Level had been strongly linked to climate change, it would still not be correct to write the story before confirming that as factually accurate.

If you don’t have the information, then you don’t write the story. That’s how journalism works.

On the call, the reporter pivoted her position from climate change being linked to the fires to climate change, generally making wildfires worse, which is a palatable position, but not one that was portrayed in her article.

She deflected criticism of the information she presented back at Dr. Flannigan, stating, “I’m not giving you different information. The prof is the expert. He’s the guy that you should talk to.”

Dr. Flannigan told us, “I don’t usually like to go to individual events and say, yes, that’s a direct result of climate change.” That contradicts the premise of the article which broadly links all the fires, including those close to Chuckegg Creek and High Level, to climate change.

Again Dr. Flannigan had said that he doesn’t just give soundbites nor link causes or factors to fires while they are still burning. He will provide extensive information to anyone who comes looking for his expertise.

“Media wants a hook, and the more sensational, the better. So, I can sometimes talk for 40 minutes, and it will be reduced down to thirty seconds or twenty seconds, and they [only] take snippets. And sometimes it’s out of context, or at least it’s not complete. It’s incomplete. And yeah, I mean, it’s a very complex issue, and to reduce it to one point is–yeah.”

The CP reporter responded to us when asked if it was okay to run a story before getting in all the evidence, saying, “Well, I don’t think that is any different than Premier Kenney making statements about what he thinks caused the fire at the time.”

Having mentioned Premier Kenney’s response to the fire, she claimed her article was a response to his “strong statements.”

“I believe that is why we did that story at the time,” she states.

Though the author isn’t wholly to blame, the CBC is dogmatic on the climate change issue and gladly publishes alarmist rhetoric on their website regularly. Those opposing the so-called “climate crisis” are ex-communicated as “deniers”, while Greta Thunberg is given sainthood.

The CBC was also all too eager to to push the falsehood that polar bears are starving because of climate change, a notion leading polar bear experts reject.

Based on this editorial trajectory, it isn’t a shock that the CBC has set up an incentive structure that could result in a biased, inaccurate piece being published without sober second thought.

It doesn’t seem to matter to them that a misreporting of the issue could impact the lives of people living in northern Alberta. People need to know accurate information on what caused a fire to be able to make an informed decision on continuing to live in the area or not.

For the record, the CBC never updated the original article or made any retraction of the information provided within.

Since CBC receives well over a billion dollars of taxpayer money annually, it would be nice if Canadians could rely on accurate information, especially in stressful situations like wildfires or extreme weather events where evacuations occurred.

While CBC and CP mislead Canadians, The Post Millennial provided quality coverage of the region, even before the fires

Before the wildfires in northern Alberta, The Post Millennial offered extensive coverage of the region, speaking to leaders both past and present on the issues pertinent to their communities.

In covering successful ventures to further the prosperity of indigenous communities at large gave reasons to take reconciliation seriously.

From treaty transparency to renewed optimism in a better tomorrow, we’ve covered it all.

The importance of shining light on underreported issues with a large platform or spotlight is crucial—especially so as we make concerted efforts to mend historical injustices.

And speaking truth to power, including the mainstream, is vital for the free press to do so consistently, and to do right.