The image is identical to the photo posted on Twitter two weeks ago by someone in Miami, Florida. 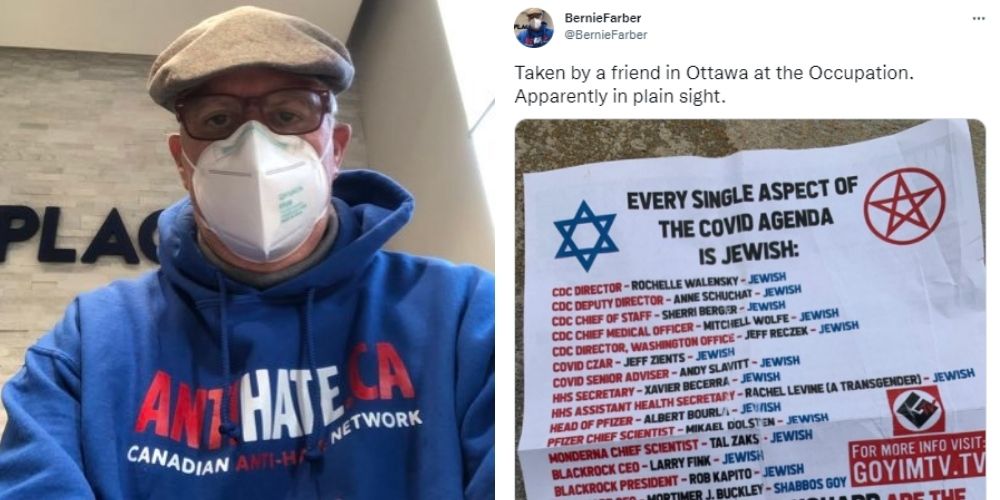 In an apparent effort to smear the truckers, Chair of the "Anti-Hate" Network Bernie Farber has spread disinformation on social media regarding the ongoing Freedom Convoy.

In a Sunday tweet, Farber posted a picture of an antisemitic flyer and said it was "taken by a friend in Ottawa at the Occupation. Apparently in plain sight."

Upon further investigation, it appears Kay is correct. Cleveland Jewish News confirmed the flyer was from weeks ago and completely unrelated to the Freedom Convoy.

Despite the flyer being a hoax, Farber's tweet was retweeted by numerous politicians and journalists. Angie Seth of CTV said "this is both disgusting and horrifying," in reaction to the fake photo.

"This is sick," said Kyle Harrietha, Deputy Chief of Staff and Director of Parliamentary Affairs to Canada's Minister of Natural Resources.

NDP MP Charlie Angus also fell for Farber's hoax. "The #ottawaoccupation gang came to Ottawa with swastikas scrawled on Canadian flags. This sh*t isn't hidden its right there in the open" he said.

Farber replied to Kay's tweets saying, "Jon, respectfully, antisemitic and racist flyers are produced and too easily accessible online to be copied and distributed. This particular flyer is not new to me either."

"You told us the image was from the Ottawa Occupation. The photo you tweeted was taken in Miami two weeks ago," replied Kay, putting pressure on Farber.

Yes in fact that photo has been reproduced numerous times I'm told over the last few weeks," Farber replied, seemingly contradicting himself.

"But that's not what you said. You posted the photo and said it was from the Ottawa occupation. Instead it was a photo that someone took in Miami, and then you got it and told everyone it was taken in Ottawa," Kay replied.

"The pic sent to  me was of a copy of this flyer allegedly seen in Ottawa where the picture I posted was taken. And yes its been seen elsewhere as well. Apologies for my unclear language," said Farber.

"It wasn't 'unclear' You said the photo was 'taken' by your friend at the Ottawa occupation, which started 8 days ago, But the photo you posted was taken at least two weeks ago.... in Miami. I'm really interested in the explanation," Kay said, continuing to mount pressure on Farber.

"Jon, last time. The pic sent to me was taken in Ottawa as I understand it. It could have come from social media originally. Don’t know. That's it my friend. Have a good one," Farber concluded, dodging any accountability.

Outside of the fake photo promoted by Farber, leftists on Twitter also shared a photo of a man holding an antisemitic sign. However, they completely neglected to point out that this individual had his racist sign torn up and was lambasted by the convoy.

Bernie Farber is the Chair "Anti-Hate" Network, which receives $250,000 in annual grants from the Trudeau government. Despite holding such a serious position, Farber is openly spreading disinformation in order to besmirch the truckers.