The University of Hong Kong has removed its 26ft-tall Pillar of Shame monument that commemorated the deaths of the student-protesters who died in the 1989 Tiananmen Square Massacre. 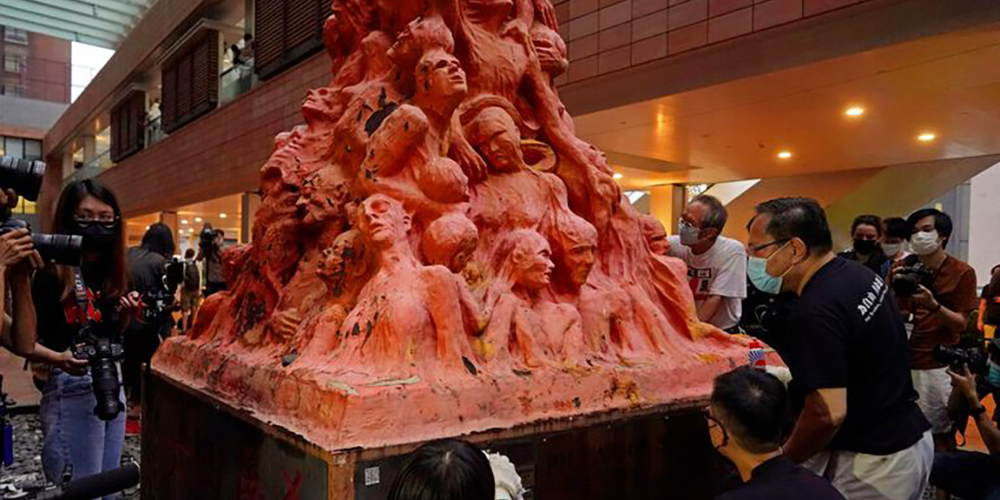 The University of Hong Kong has removed its 26ft-tall Pillar of Shame monument that commemorated the deaths of the student-protesters who died in the 1989 Tiananmen Square Massacre.

Workers arrived at the university early Thursday to remove the monument, which was slated for removal since October, over the objections of its Danish sculptor.

Sculpted by Jens Galschiot, the so-called Pillar of Shame depicts 50 torn and twisted bodies piled atop each other to symbolize the lives that were taken by the Chinese military during the bloody crackdown on the student protests for democratic reforms in China on June 4, 1989.

The monument’s removal comes amid a clampdown on pro-democracy activism in the nation-state, where the annual candlelight vigil commemorating the victims of Tiananmen has been banned. At least 24 activists were arrested for holding a vigil at Hong Kong’s Victoria Park last year.

NPR reported: “Workers barricaded the monument at the University of Hong Kong late Wednesday night. Drilling sounds and loud clanging could be heard coming from the boarded-up site, which was patrolled by guards.”

“The dismantling of the sculpture came days after pro-Beijing candidates scored a landslide victory in the Hong Kong legislative elections, after amendments in election laws allowed the vetting of all candidates to ensure that they are ‘patriots’ loyal to Beijing,” NPR added.

The removal of the statue comes during the same week that Hong Kong executive leader Carrie Lam traveled to Beijing to report on developments in the city, where authorities have quashed dissent with the imposition of a national security law that targets pro-democracy activists and anti-communist reform.

Since its implementation in 2019, which prompted widespread protests in Hong Kong, hundreds of protesters have been arrested and tens of thousands more have fled to Canada, the United Kingdom, and Australia for asylum.

"We don't know exactly what happened, but I fear they destroy it," said the sculptor Galschiot to the Associated Press. "This is my sculpture, and it is my property."

The artist has previously written to the university to assert his ownership of the sculpture, but his requests have gone ignored.