Writer and comedian Andrew Doyle wrote on Twitter, "The vandalism or destruction of art is always an authoritarian act. But more than that - it represents a repudiation of civilisation and the achievements of humanity." 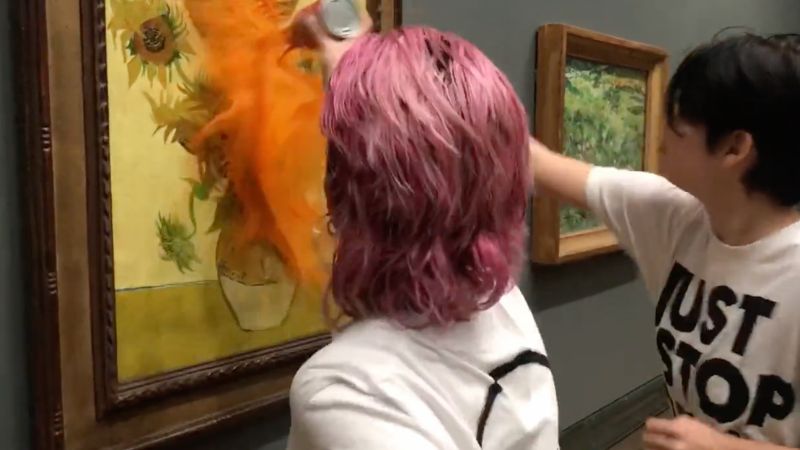 In the lasted act of vandalism against famous works of art, climate activists threw cans of soup on Van Gogh’s Sunflower painting in London.

Two activists, wearing shirts that said "Just Stop Oil," threw cans of what appears to be tomato soup on the masterpiece, before super gluing their hands to the wall next to the piece.


According to the BBC, two people have been arrested in connection to the incident.

Writer and comedian Andrew Doyle wrote on Twitter, "The vandalism or destruction of art is always an authoritarian act. But more than that - it represents a repudiation of civilisation and the achievements of humanity."

A statement from the museum read, "At just after 11am this morning two people entered Room 43 of the National Gallery.

"The pair appeared to glue themselves to the wall adjacent to Van Gogh's Sunflowers (1888). They also threw a red substance - what appears to be tomato soup - over the painting.

"The room was cleared of visitors and police were called. Officers are now on the scene," the statement continued. There is some minor damage to the frame but the painting is unharmed. Two people have been arrested."

London’s Metropolitan Police said, "Officers were rapidly on scene at the National Gallery this morning after two Just Stop Oil protesters threw a substance over a painting and then glued themselves to a wall.

"Both have been arrested for criminal damage and aggravated trespass. Officers are now de-bonding them."

"The cost of living crisis is part of the cost of oil crisis. Fuel is unaffordable to millions of cold, hungry families. They can’t even afford to heat a tin of soup," she continued, holding up a can of the soup poured on the painting.

"Meanwhile, crops are failing," she added, as security began to intervene. "Millions of people are dying in monsoons, wildfires, and severe drought. We cannot afford new oil and gas."

This act is just the most recent in a string of vandalism perpetrated by Just Stop Oil, as well as Ultima Generazione, in the UK and Italy.

According to ARTnews, Just Stop Oil activists glued themselves to Horatio McCulloch’s My Heart’s in the Highlands, painted in 1860, on June 29 at the Kelvingrove Art Gallery and Museum in Glasgow.

On June 30, activists from the group glued themselves to another Van Gogh work, Peach Trees in Blossom, painted in 1889, at the Courtauld Institute in London.

On July 1, activists glued themselves to J.M.W Turner’s Tomson’s Aeolian Harp, painted in 1809. The painting was being shown at the Manchester Art Gallery, with the activists also spray painting "no new oil" on the ground in front of the painting.

The group continued with these acts of vandalism on July 4, with John Constable’s The Hay Wain, held at the National Gallery, and on July 5, with Giampietrino’s The Last Supper.

In Italy, Ultima Generazione activists glued themselves on July 22 to Sandro Botticelli’s Primavera, painted in 1477, which is being shown at the Uffizi Gallery in Florence.

The Italian group continued on July 30, with Umberto Boccioni’s Unique Forms of Continuity in Space, on August 4, with Laocoon and His Sons, and on August 21, with protestors chaining themselves to the Scrovegni Chapel.

These acts of vandalism have spread to Germany, with climate activists gluing themselves to Raphael’s Sistine Madonna on August 22, and to France with a man disguised as a grandmother in a wheelchair throwing a cake at the Mona Lisa.

In many of these cases, the ornate frames that hold these paintings have been damaged, requiring conservation work to remove the superglue and restore it.