The Democratic debates took that place in Iowa saw a heavy moderator bias against Bernie Sanders, prompting many Democrat voters to trend #CNNisTrash. 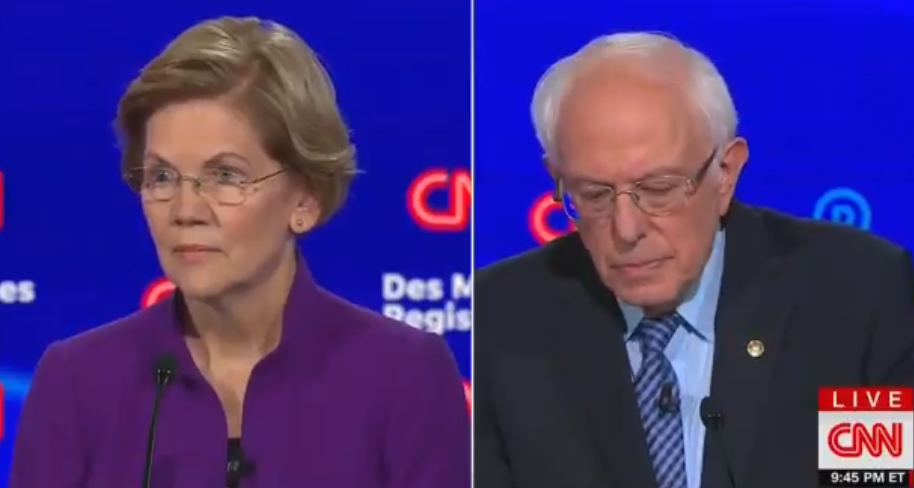 The Democratic debates took that place in Iowa saw a heavy moderator bias against Bernie Sanders, prompting many Democrat voters to trend #CNNisTrash and #NeverWarren.

A few days ago, “sources” told CNN that Bernie expressed doubt to Elizabeth Warren on whether a woman can win the Presidency.

Bernie Sanders called the allegations “ludicrous,” saying “it’s sad that, three weeks before the Iowa caucus and a year after that private conversation, staff who weren’t in the room are lying about what happened.”

But Warren’s campaign refused to respond.

Elizabeth Warren later said confirmed that Bernie had told her this, but refused to go into details.

This spar between a socialist and a seemingly-progressive candidate was weaponized by CNN when during the debates on January 14th.

Moderators asked Bernie whether he said a woman couldn’t win. He, again, denied it and added that, in fact, he had asked Elizabeth Warren to run against Hillary Clinton and he only ran because Warren refused.

The moderators, then, asked him the same question again. He denied these allegations again.

However, then the moderators went on to asked Elizabeth Warren if she “agrees with Bernie’s claim that a woman can’t win”, to which Bernie and the audience laughed.

Elizabeth Warren responded with, “I disagree” and changed the topic.

But that wasn’t all. CNN also spent a major portion of the debate on whether US troops should stay in the Middle-East. Bernie Sanders was the only one who said they should be pulled out.

However, when it came to the question of healthcare, the moderators kept asking Bernie “how he was going to pay for it.”

If the bias against Bernie Sanders couldn’t be more clear, CNN framed questions and headlines with an explicit anti-Bernie tone.

Many on the left and right were furious at the utter lack of objectivity from CNN, causing a spike in the hashtag #CNNisTrash.

At the end of the debate, Bernie reached out to Elizabeth Warren for a handshake, which she explicitly refused. Hence, Bernie supporters also began trending the #NeverWarren hashtag.

Many in other mainstream media outlets such as MSNBC and the Hill, were also confused by this explicit anti-Bernie bias by CNN.