On that night, the Nazis killed at least 91 people and vandalized 7,500 Jewish businesses. They also burned more than 1,400 synagogues. 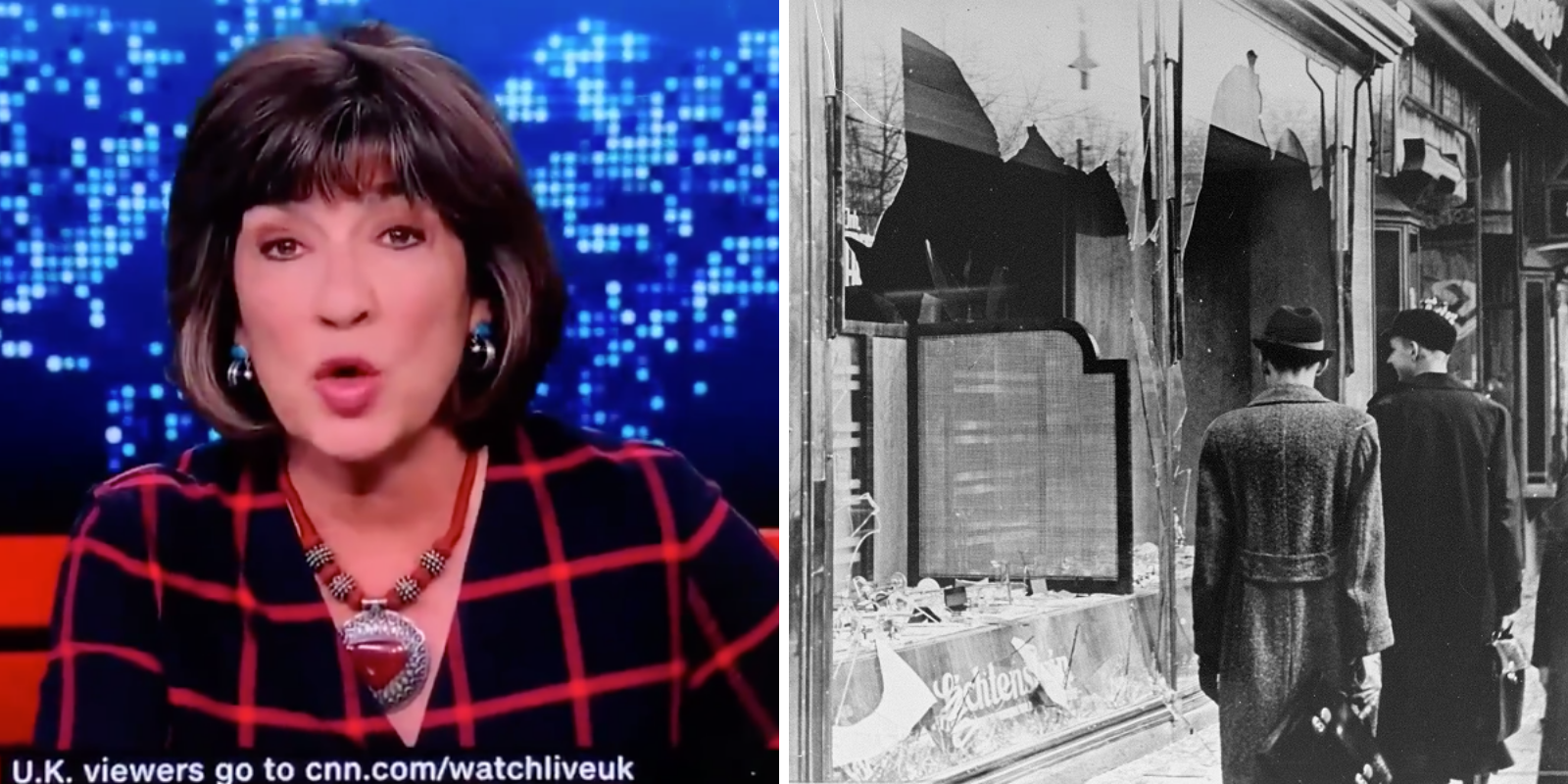 Last week was the anniversary of, Kristallnacht "the night of broken glass," a 1938 two-day pogrom during which the Nazis burned more than 1,400 synagogues and Jewish institutions in Germany and Austria was commemorated around the world by Jews and non Jews alike. On that night, the Nazis killed at least 91 people and vandalized 7,500 Jewish businesses. They also burned more than 1,400 synagogues.

As scenes of Jewish victims and Nazi book burnings were broadcast during the opening segment of her daily global affairs interview program on Thursday, Amanpour narrated that "this week, 82 years ago, Kristallnacht happened," explaining that "it was the Nazis' warning shot across the bow of our human civilization that led to genocide against a whole identity." Amanpour continued, "…and, in that tower of burning books, it led to an attack on fact, knowledge, history and truth."

According to The Jerusalem Post "While recalling the story of the infamous antisemitic slaughter, CNN Chief International Anchor and host of CNN International's nightly interview program Christiane Amanpour, compared President Donald Trump's presidency to that tragic event, explaining there has similarly been a "modern day assault" attacking "those same values."

"After four years of a modern-day assault on those same values by Donald Trump, the Biden/Harris team pledges a return to norms, including the truth," she said.

The segment set off immediate backlash on social media, primarily on Twitter.

Israeli Diaspora Affairs Minister Omer Yankelevitch and top Israeli officials demanded an apology from Amanpour on Sunday saying that CNN "…should be a partner in the global effort to fight antisemitism and not fuel the fire."

Yankelevich added "Using the memory of the Holocaust for cheap headlines or a political agenda is concerning and distorts the historical and moral truth."

Israeli Consul-General in Atlanta Anat Sultan-Dadon sent a letter to CNN executive vice president Rick Davis, obtained by The Jerusalem Post on the condition that it not be quoted. According to the Post "The consul-general expressed outrage at Amanpour's use of the Holocaust for political means, and said it disrespects those who perished."

Former Israeli consul-general in New York Dani Dayan also tweeted, "The foolish comparison Amanpour made between Kristallnacht and Trump must bring about her immediate dismissal from CNN. There is no immunity for Holocaust deniers."

In an open letter to Amanpour, David Harris, Executive Director of the non partisan American Jewish Committee wrote "I am the first person in my extended family born in the United States. Every relative older than me was touched by the Second World War and Holocaust. That includes my father, who was a target of Kristallnacht in Austria."

Harris continued "…in setting the stage for your attack on the Trump administration, you purported to describe the events of November 9-10, 1938, which came to be known as Kristallnacht, or the Night of Broken Glass. You said it was an assault on 'fact, knowledge, history, and truth.' But something striking was missing from your description. Not a single word about the actual targets of the Nazi assault in Germany and Austria. Those targets were Jews, synagogues, and Jewish-owned businesses. The damage was incredibly widespread. Scores killed. 30,000 Jewish men arrested and imprisoned in Buchenwald, Dachau, Sachsenhausen, and other infamous concentration camps. 1000+ houses of worship burned to the ground. Thousands of shops destroyed."

White House Press Secretary Kayleigh McEnany called Amanpour's remarks "despicable," and said the CNN anchor "must apologize for trivializing the Holocaust & the tragic genocide of millions of Jews. McEnany continued "They must also apologize for slandering the most pro-Israel President in history."

During the opening of her show on Monday, Amanpour finally apologized. "I observed the 82nd anniversary of Kristallnacht, as I often do. It is the event that began the horrors of the Holocaust. I also noted President Trump's attacks on history, facts, knowledge, and truth," Amanpour said, referencing her comparison. "I should not have juxtaposed the two thoughts. Hitler and his evils stand alone, of course, in history. I regret any pain my statement may have caused."