“They are complicit in (Trudeau’s) attempt at obstruction of justice,” Conservative MP Peter Kent told reporters after the Ethics committee meeting adjourned. 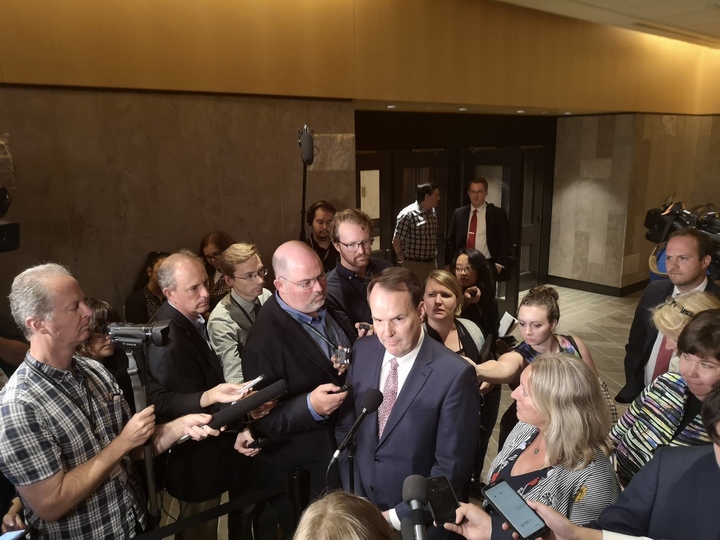 As Canada’s Ethics Commissioner waited in the wings to testify, Liberal MPs used their majority to quash a motion for Mario Dion to appear before Parliament and explain why he found Prime Minister Justin Trudeau guilty of breaking federal conflict of interest law.

“They are complicit in (Trudeau’s) attempt at obstruction of justice,” Conservative MP Peter Kent told reporters after the Ethics committee meeting adjourned, and gave a nod to lone Liberal MP Nathaniel Erskine-Smith who dissented.

“(He) had the independent courage to support my motion. But the other four members who didn’t speak and followed the direction of a hitman, a stranger…(Steve) McKinnon obviously directed (them) to sit silently, to abdicate their responsibilities.”

“The opposition seeks to prolong this for reasons of politics, reasons of partisan games,” MacKinnon told the committee, before he and Liberal MPs Frank Baylis, Karen McCrimmon, Anita Vandenbeld and Mona Fortier rejected Dion’s appearance.

After the meeting MacKinnon told reporters that Parliament, along with Dion had examined the matter enough and suggested citizens were inundated with the SNC-Lavalin conjecture.

But Conservative MP Lisa Raitt, who’s not a regular committee member but a speaker at today’s deliberations, dismissed MacKinnon’s take.

“The Prime Minister of Canada has come out to say that number one, he cooperated fully…and number two, that he disagrees with some of the conclusions of the Ethics Commissioner,” Raitt told reporters

“The Ethics Commissioner has said clearly that there were nine witnesses that he wanted to hear from and he didn’t get a chance…and secondly, the Prime Minister has never really been clear on what aspects of the commissioner’s report that he actually is in disagreement with.”

When Angus faced the media with his take, he asked what the governing party MPs were “so frightened of that they shut down the Ethics Commissioner from presenting his report to our committee?”

“I’ve sat many years on the Ethics committee, under the wild and woolly days of Stephen Harper, throughout the years of Justin Trudeau – I have never seen an effort to restrict the ability of an officer of parliament from reporting to the ethics committee,” said Angus.

“And who did it? Well, the former director of the Liberal Party was brought in to shut this down. This is about damage control, because this is about the Prime Minister of this country thinking that he’s above the law of the land.”

SNC-Lavalin and two of its subsidiaries stand accused of paying $48-million in bribes to Libyan officials to win contracts there between 2001 and 2011.

If convicted, the company is subject to a 10-year ban on bidding for federal contracts. On the other hand, the spectre of such a ban would be lifted via a deferred prosecution agreement—new criminal code contingencies included in 2018’s omnibus budget bill.

Otherwise known as a DPA, its negotiation would allow for fines and corporate accountability undertakings to supplant the criminal prosecution, currently proceeding through a Québec provincial court.

And the Ethics Commissioner caged Trudeau’s attempt to sway Wilson-Raybould — who refused to enter into a deferred prosecution agreement with SNC-Lavalin — as running “contrary to the constitutional principles of prosecutorial independence and the rule of law.”

Wilson-Raybould, a lawyer and the country’s first indigenous Attorney General, would resign from cabinet over the scandal and was turfed from the Liberal caucus in April by Trudeau for blowing the whistle.

The SNC-Lavalin scandal has dogged the Trudeau government since the February 7, 2019, Globe and Mail story reported Wilson-Raybould was pushed out as attorney general for denying SNC-Lavalin a DPA.