Members of the media were treated to dessert in the White House briefing room today after Press Secretary Psaki's mother in law made a cookie delivery. 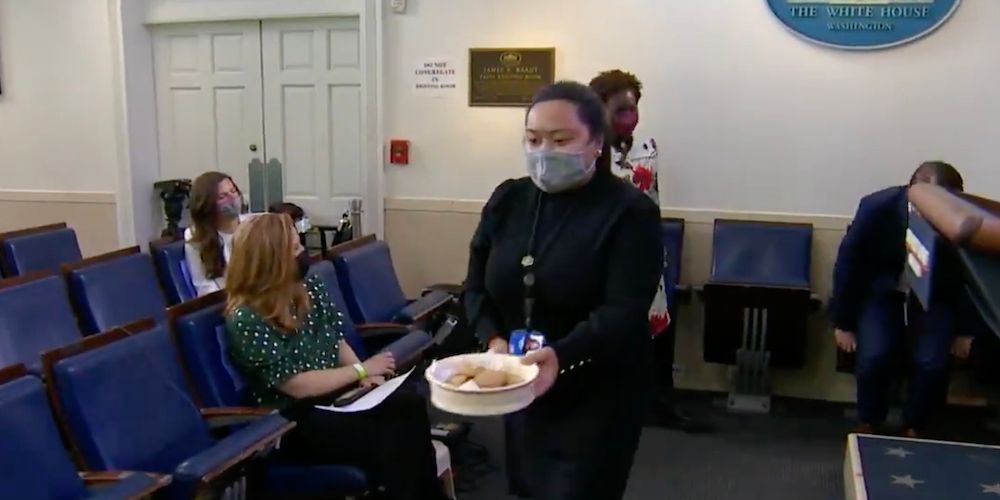 Members of the media were treated to dessert in the White House briefing room today after Press Secretary Psaki's mother-in-law made a cookie delivery.

Psaki stated that she had "promised snacks" for the reporters, and that the order would be fulfilled by her mother in law.

A tin of "homemade chocolate chip cookies" was then passed around the room and members of the press each took one.

In the age of COVID-19, such a scene feels verboten to many; bare hands reaching into a communal container for food. However, Psaki emphasized that it would be done in a "COVID-safe way".

According to The Hill, the White House "requires all journalists entering the building to get tested and wear masks during the briefing".  It has also "limited the number of reporters attending each briefing" to reduce the risk of potential spread.

Members of the press can be heard thanking Psaki for the treat, as she wishes them a great weekend.

While some have criticized the move as an attempt to bribe the media, it looked more like a harmless attempt to create some semblance of normalcy.