David Frum triggered by Elon Musk for comparing Trudeau to Hitler, after he compared Trump to Hitler for YEARS

Musk has deleted the satirical meme comparing Trudeau to Hitler. 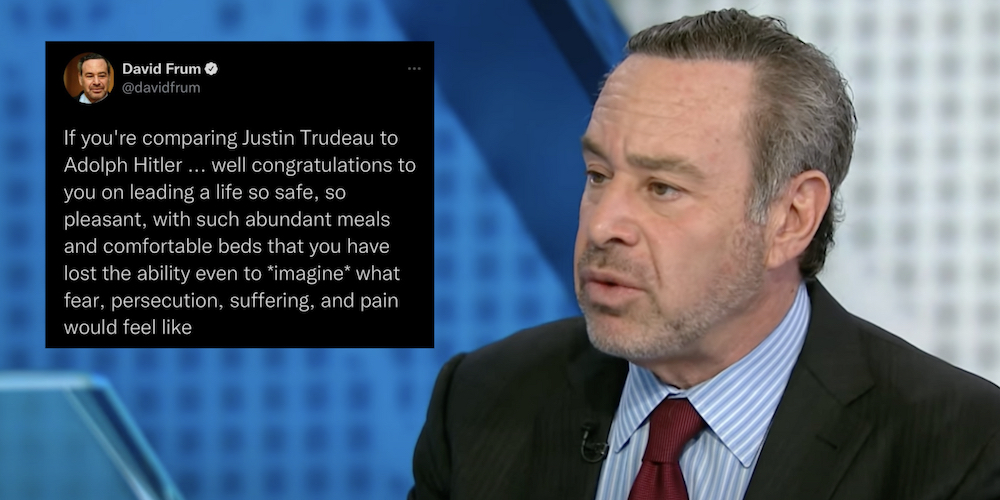 In a move that many have labelled hypocritical, David Frum slammed Elon Musk for comparing Trudeau to Hitler after he compared Trump to Hitler for years.

In response to a meme posted by Musk wherein the billionaire compared the Canadian Prime Minister to Hitler, Frum took to Twitter to voice his displeasure.

Many were quick to call out the fact that Frum's condemnation was hypocritical, as he has, if only joking, made comparisons between Trump and Hitler in the past.

On Monday, Trudeau invoked the Emergencies Act as tensions between his government and Freedom Convoy protesters in Ottawa continue to escalate.

In response, Musk tweeted a meme of Hitler with the caption:

"Stop comparing me to Justin Trudeau. I had a budget." The now-deleted tweet sparked backlash, and among those criticizing Musk was Frum.

"If you're comparing Justin Trudeau to [Adolf] Hitler," Frum wrote, "well congratulations to you on leading a life so safe, so pleasant, with such abundant meals and comfortable beds that you have lost the ability even to *imagine* what fear, persecution, suffering, and pain would feel like."

Stating in another tweet that he's a "Deep non-fan of two generations of Trudeaus in power," The Atlantic writer added, "but ... yeesh @elonmusk."

While many agree that Musk's tweet did cross the line, Frum was quickly called out on social media for having made similar posts in the past.

In response to a pro-Trump event that was held in November 2020, Frum tweeted out an image of a Nazi rally with the caption, "What was advertised," followed by a video of the Million MAGA March, saying, "What was delivered."

While few saw Frum's tweet as poking fun at the media's coverage of Trump, many called him out for suggesting that pro-Trump events were akin to Nazi rallies.

"Be a better human being," replied evolutionary behavioral scientist Gad Saad, who escaped persecution in Lebanon. "Don’t succumb to such grotesque faux-comparisons. You are a pampered Westerner who knows nothing about existential fear.  Speak to people who hail from such societies including yours truly."