Democracy should be about more than voting once every four years

Unfortunately, in Ontario, voters often need to wait years before handing out a pink slip that should have come long ago. 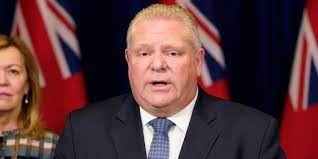 In a democracy, voters are supposed to be the boss, so we should always have the ability to fire our politicians for their poor performance.

Unfortunately, in Ontario, voters often need to wait years before handing out a pink slip that should have come long ago.

Recall legislation allows voters to launch a petition and, if it gets the required number of signatures, citizens can go to the ballot box to decide whether to recall a politician in a by-election.

Introducing recall legislation in Ontario would not be a novel concept in Canada.

British Columbia has had recall legislation in place for years, and Alberta Premier Jason Kenney just introduced it in the prairie province last month.

“Ordinary Alberta voters are the boss in our democracy and if they lose faith in their elected representatives, they can hold them to account in between elections,” said Kenney .

Ford should consider following in Kenney’s footsteps and let Ontarians hold all their provincial and municipal politicians accountable more than once every four years. After all, there’s a laundry list of examples in Ontario where recall could have come in handy.

Just months after the 2018 election, former Ontario cabinet minister Jim Wilson left the PC caucus due to sexual harassment allegations. He’s been collecting a pay cheque as an Independent ever since.

Voters in Wilson’s riding, Simcoe-Grey, will have been stuck with an MPP plagued in scandal for nearly four years before having a chance to replace him. Shouldn’t voters in Simcoe-Grey be able trigger a by-election to decide whether they want to keep him around?

Another example comes from London, Ontario, where former mayor Joe Fontana refused to leave office in the face of criminal bribery and forgery charges. London city council asked him to leave in 2012, but it took two more years until Fontana finally resigned. Shouldn’t London taxpayers have had the right to pick a new mayor sooner?

Former Toronto mayor Rob Ford had most of his mayoral powers stripped from him by city council after admitting to illegal drug use. For several months, Ford became mayor in name only. If Toronto voters could have recalled Ford, the electorate, rather than the council, could've decided whether Ford should have kept his mayoral powers or departed from office.

The fact that politicians know they can be recalled can improve their responsiveness to public opinion and force them to think twice before sticking their hands into the taxpayer cookie jar.

There’s also a lot of recall models Ford can choose from to make sure Ontario gets it right. While critics of recall legislation worry the process could lead to constant by-elections, that hasn’t been the case in practice. British Columbia has had recall for more than two-and-a-half decades and there’s only been one successful recall campaign.

The bottom line is that the people need a way of giving politicians the pink slip more than just once every four years. Voters should be in charge, and we should always have a means of holding our elected politicians accountable.

Recall legislation is the key to allow us to do so.  It’s time to follow Alberta and B.C.’s lead.