The poll worker allegedly engaged in electioneering was selecting the Democrat straight ticket on a voter's ballot as she was explaining how the voting machines worked. 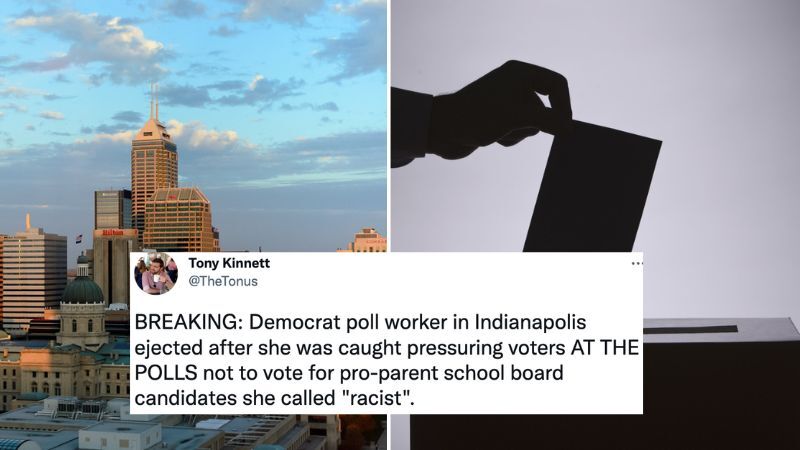 A Democrat poll worker in Carmel, a suburb of Indianapolis, Indiana, was ejected from their polling site on Saturday after sources reported that she was pressuring citizens to vote for Democrat candidates in a school board race.

Executive Director of the Chalkboard Review Tony Kinnett wrote, "BREAKING: Democrat poll worker in Indianapolis ejected after she was caught pressuring voters AT THE POLLS not to vote for pro-parent school board candidates she called 'racist'."


The Indiana Election Day Handbook, which covers the rules for poll workers on both election day and early voting throughout the election cycle, explains electioneering on page 5.

"State law defines 'electioneering' as making a verbal statement or displaying a written statement indicating support or opposition to any candidate, political party, or public question appearing on the ballot," the handbook states. It is a Class A misdemeanor crime.

Kinnet posted an update on Sunday stating, "We have been told by multiple sources that the Hamilton County (IN) sheriff's department will begin investigation on Monday. @ChalkboardRev is standing by for a statement from the Ham. Co. Election board."

The poll worker allegedly engaged in electioneering was selecting the Democrat straight ticket on a voter's ballot as she was explaining how the voting machines worked.

There are a variety of school board seats in contention in Hamilton County, but, as Kinnet notes, the GOP candidates have been unified in their pro-parent positions.

Hamilton County Republican Party Chairman Mario Massilliamany posted a statement after the incident, writing, "A Democrat poll worker in Carmel was removed from working an early voting site for attempting to pressure voters not to support one of our GOP-endorsed school board candidates. I have been in communication with local election officials to make sure poll workers are reminded that such activity, called electioneering, is illegal."

"This should serve as a cautionary reminder that those desperate to hold on to power or gain power will do anything - including breaking the law - to thwart the efforts of parents and taxpayers to replace our school boards with officials who more accurately reflect the values of our community," Massilliamany added.

The report that the poll worker claimed a GOP candidate was "racist" comes after an Indiana Democrat political action committee, HSEqual, said that voting for the Republican would set the clocks back to the time of Jim Crow.

HSEqual say they are a "group of people concerned about equity in HSE schools."

Kinnet reports that while no official response has yet been given, Indiana Democrats are "planning to claim this is just a misunderstanding caused by "forgetting to set up the 'no electioneering' signs."

UPDATE: According to Chalkboard Review, the poll worker, James Zheng, was accused by the election administrator, Beth Sheller, of telling black voters "not to vote for the racist candidates outside." Several of the pro-parent candidates running for school board were beyond the electioneering boundaries nearby.