Florida Gov. Ron DeSantis announced legislation that would ban state funds from going to schools that teach CRT, and prohibit corporations from including the teachings in employee training programs. 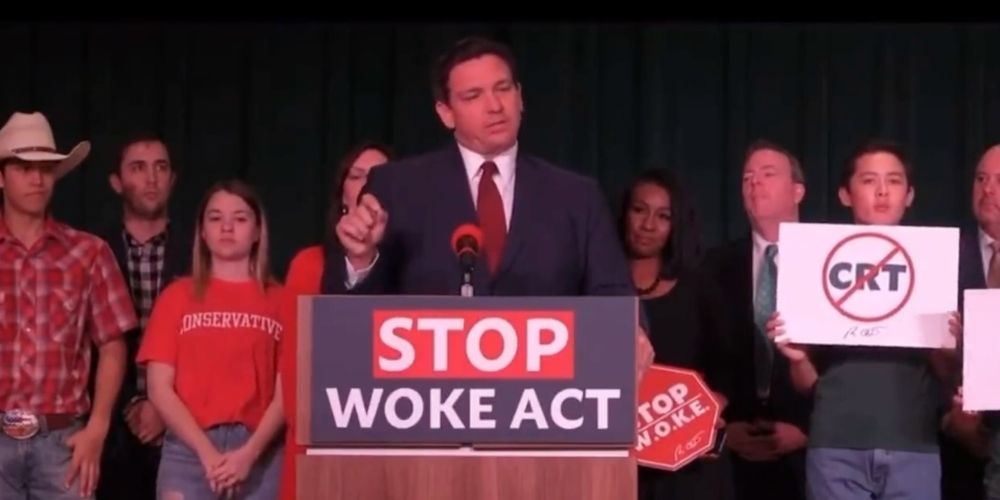 On Wednesday, Florida Governor Ron DeSantis announced legislation that would ban state funds from going to schools that teach critical race theory, and prohibit corporations from including the teachings in employee training programs.

DeSantis announced the proposal of the Stop the Wrongs to Our Kids and Employees (WOKE) Act during a press conference in Wildwood, Florida.

The legislation would "give businesses, employees, children and families tools to fight back against woke indoctrination," according to a press release from DeSantis' office.

"The Stop WOKE Act will be the strongest legislation of its kind in the nation and will take on both corporate wokeness and Critical Race Theory. Today's proposal builds on actions Governor DeSantis has already taken to ban Critical Race Theory and the New York Times' 1619 project in Florida's schools," the press release continued.

The WOKE Act would codify "the Florida Department of Education's prohibition on teaching critical race theory in K-12 schools," according to a document released by DeSantis' office. It would also prohibit school districts, colleges, and universities from hiring "woke CRT consultants."

"Our legislation would defund any money from K-12 to higher ed going to CRT," DeSantis said at the press conference.

"I view the wokeness as a form of cultural Marxism," DeSantis continued. "They want to tear at the fabric of our society and our culture, really things we've taken for granted, like the ability of parents to direct the upbringing of their kids."

"In Florida we are taking a stand against the state-sanctioned racism that is critical race theory," said DeSantis. "We won't allow Florida tax dollars to be spent teaching kids to hate our country or to hate each other. We also have a responsibility to ensure that parents have the means to vindicate their rights when it comes to enforcing state standards."

"We also have a responsibility to ensure that parents have the means to vindicate their rights when it comes to enforcing state standards. Finally, we must protect Florida workers against the hostile work environment that is created when large corporations force their employees to endure CRT-inspired 'training' and indoctrination," DeSantis continued.

"How is it not a hostile work environment to be attacking people based on their race or telling them that they're privileged or part of oppressive systems when all they're doing is showing up to work and trying to earn a living?" DeSantis said. "We believe that that violates the Florida Civil Rights laws, but to the extent that it doesn't, we’re going to make sure that the law does include this."

The prosed bill builds on a move by the Florida Department of Education in June, which banned CRT teachings in public school classrooms.