Vehicles and garage doors were also spray painted in a Kanata, Ontario neighbourhood. 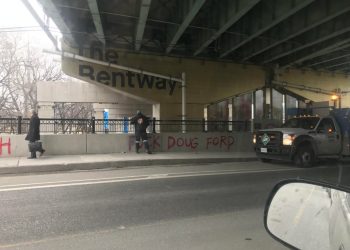 Several spats of graffiti and vandalism took place in Ontario this week targeting the province’s Premier.

The graffiti comes at a time when students across the province are protesting the Ford government’s changes to the education system.

In one case “F*ck Doug Ford” was spray painted onto The Bentway under the Gardiner Expressway in Toronto on April 5th. The graffiti also featured a characteristic antifa emblem.

I don’t condone graffiti but this is pretty funny.  Police were stopped and looking at it when I walked by. #dougford

Several hours away, similar graffiti was spotted in Kanata, Ontario, a suburb of Ottawa.

Erin Blaskie a member of  Briarbrook and Morgan’s Grant Community Association posted on the group’s Facebook page that vehicles and garage doors near Celtic Ridge Crescent were spray painted by vandals.

“The neighbourhood was hit last night and multiple vehicles and garages have been spray painted with vulgarity and “Doug Ford,” reads the post.

Most of the vandalism reported in the comments section of the group stated that the graffiti took place on Celtic Ridge Crescent and Maxwell Bridge Rd.

Locals have filed a police report on the incident.

Not the first instance of anti-Doug Ford vandalism

This is not the first incident in which the Premier or his government have been the target of graffiti and vandalism.

Ahead of a fundraising dinner in February, the host Toronto Congress Centre was vandalized with similar graffiti.

In another more extreme instance in October, the Kawartha Lakes constituency office of Ontario’s Labour Minister Laurie Scott was broken into and vandalized.

“This type of vandalism crossing the line is not going to be accepted by  anyone,” said Scott about the attack. “I need to protect the workers in our office from this intimidation and bullying.”