"We should be much more worried about population collapse." 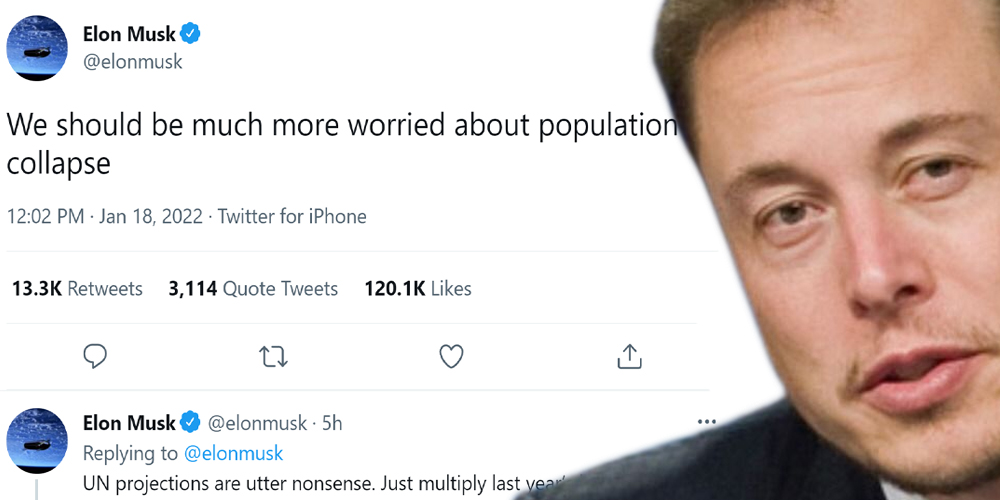 Elon Musk urged the world today to have more babies, given recent concerns about birthrates and the continuance of the global population.

The outspoken Twitter user won TIME magazine’s Person of the Year award for 2021. This isn’t the first Musk has brought up the topic. He warned about a "declining world population" in June 2019, again in July 2021, and once more last December.

"If there aren’t enough people for Earth, then there definitely won’t be enough for Mars," Musk concluded. His passing thoughts were sent out to over 70 million Twitter followers.

These newest comments about declining births aren’t unusual. The billionaire spoke his mind when previously feuding with Senator Elizabeth Warren.

When it comes to Musk’s latest remarks, on the positive end of those agreeing with him:

"The very first command that God gives to mankind if found in Genesis 1:28: 'Be fruitful and multiply...'"

Whereas at least one detractor opposing the tweet questioned: "Why continue to populate the planet if we still have almost a billion in poverty and hundreds of millions going hungry?"

In support of his argument, the eccentric billionaire linked to a pair of articles from BBC and NPR discussing the matter.

The BBC one is dated July 2020 and explored the topic of declining fertility rates on a global level. Their piece displays a graph of the global fertility rate: what was once nearly 2.5 live births per woman in 2017, was forecasted to plummet to 1.75 by 2050 and 1.5 by 2100.

"Researchers expect the number of people on the planet to peak at 9.7 billion around 2064, before falling down to 8.8 billion by the end of the century," the BBC piece says. They list places like Italy and Japan as countries whose populations will halve by the next turn of the century. Places with a slower predicted rate of decline are the United Kingdom.

The NPR piece that Elon Musk shared on his Twitter is dated May 2021, after the first year of the pandemic and focusing on the United States. "U.S. Birthrate Fell By 4% In 2020, Hitting Another Record Low" said the headline.

"This is the sixth consecutive year that the number of births has declined after an increase in 2014, down an average of 2% per year, and the lowest number of births since 1979," commented the National Center for Health Statistics at the time.

Elon Musk has also done his part when it comes to having children. "Trying to set a good example," he told one commenter.

Tragically according to The Sun, Musk’s first born Nevada "died at just 10 weeks old of sudden infant death syndrome." After that he had a pair of twins, and then a set of triplets with his former wife Justine Wilson.

The most recent addition of Musk's seed came with the baby he fathered when he was with the musician Grimes. Much of the public's attention on the child came via its unusual name "X Æ A-Xii."

Elon Musk is one of the richest men alive, heading the vehicle company Tesla alongside the space faring SpaceX. In 2021 alone he roughly doubled his wealth from $121 billion USD to upwards of $277 billion.