"We can't shut down our city again. We can't allow the city to go further into economic despair." 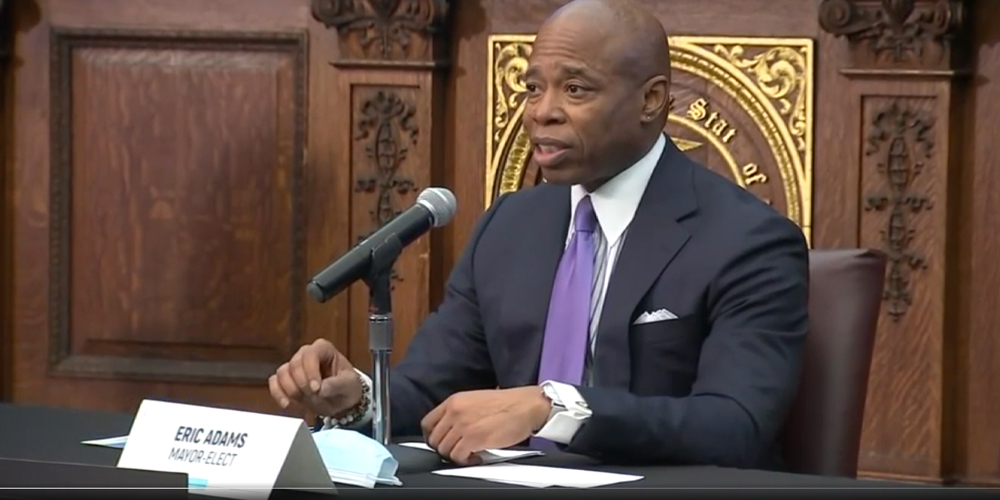 Earlier on Thursday, New York City’s next Mayor outlined to the public how he plans to address handling COVID-19. Many commentators interpreted it as a continuation of policies set forth by his predecessor.

According to the New York Post, incoming Mayor Eric Adams will make a final call about mandating COVID shots for school students next spring. But he also spelled out that he’s keeping in place Bill de Blasio’s order for private-sector mandates for businesses.

"The goal is to be cooperative and not punitive," Adams said in laying out his vision. His policy includes distributing at-home tests and N95 masks.

In responding to questions from reporters, Eric Adams made it clear his outlook about the COVID pandemic is learning to live with the virus instead of vying to completely eradicate it.

The tenure of incoming Mayor Eric Adams already has some legs to it. He publicly condemned the fact that the News Corp. Christmas tree arsonist was let go without bail. Activist groups like Black Lives Matter have already positioned themselves to riot if Adams reinstitutes the anti-crime units of the NYPD.

But the Mayor-elect’s agenda surrounding the pandemic has been telegraphed. Even before his election, Eric Adams outlined his desire to mandate the COVID vaccine for kids under age 12 pending the FDA’s approval. Upon his victory, mandates were one of the first things Adams urged NYC Mayor de Blasio to assess in negotiations with union groups.

Vaccine mandates haven’t had the most favorable coverage, ever since the recent fracas at a NYC Burger King went viral.

According to New York Daily News, Eric Adams will be sworn on as the 110th Mayor of New York City shortly after the ball drop on New Year’s eve ushering in 2022.