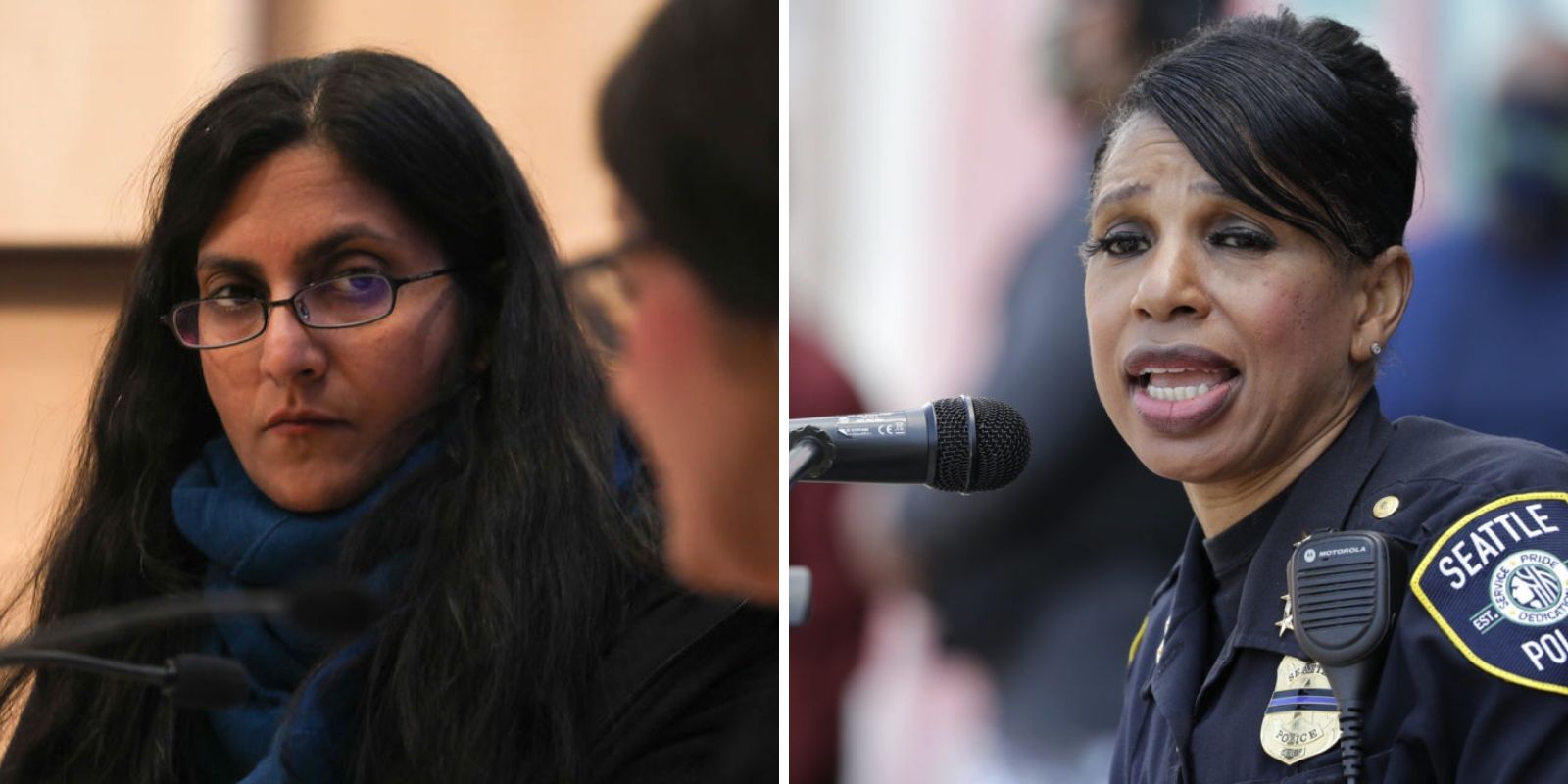 Seattle City Council Member Kshama Sawant celebrated the resignation of black Seattle Police Chief Carmen Best and the firing of minority officers in the "fight to stop racism." In her most recent blog post, and in light of skyrocketing crime, Sawant still believes in abolishing the police department. "This is not a case of good and bad apples," she wrote, "–the whole tree is rotten. The police and the state under capitalism enforce the interests of the billionaire class."

Thursday Sawant posted those words to her official city of Seattle Council Member blog. Sawant has been calling for an end to capitalism and a socialist/Marxist revolution since her first campaign for office. In her post she ranted: "The protest movement has been nothing short of an earthquake in American politics, exposing the endemic racism and police violence of US capitalism and putting mayors, police chiefs, and political establishments across the country on the defensive."

Sawant's end goal has been clear since the beginning, an end to capitalism and a socialist takeover of America.

In this video the socialist, called for the "racist, sexist, violent, utterly bankrupt system of capitalism" and seizing of fortune 500 companies. She has even suggested a violent takeover of the Seattle based tech giant Amazon. Yet this "racist" system appointed Best as the first African American woman in the role of Seattle police Chief.

Sawant denied that there have been any riots in Seattle or the rest of the country and blamed police for the violence rather than the rioters who have targeted police officers with explosives, bricks, rocks bottles, lasers and even human excrement.

"Like many of the other soon-to-be ex-police chiefs, Chief Best has repeatedly lashed out at the movement and its demands, calling the protests a 'riot' and blaming activists for police violence." This because Chief Best condemned the violence and rioting.

In July, after rioters launched an explosive device that left an eight-inch hole in a wall of a city police precinct building Best said: "What we saw today was not peaceful, the rioters had no regard for the public’s safety, for officers' safety or for the businesses and property that they destroyed." In her blog, Sawant called for releasing all protestors without charges.

Sawant continued "The fact that Best is herself Black did not change that underlying reality."

Sawant called the cuts imposed this week by the Seattle City Council that will affect over 100 officers in an already depleted police force operating well below safe standards "miniscule" and lamented not achieving the arbitrary 50 percent she pledged. Sawant was the lone "no" vote for cuts because, in her opinion, they did not go far enough.

Sawant criticized Best for not accepting a massive pay cut that would have paid Best significantly less that her white predecessor. In her resignation announcement press conference, Best felt these cuts were specifically targeting her and were "punitive and vindictive."

Under Best's leadership, SPD has hired more minority officers and worked on reforms, including de-escalation techniques, while conforming to a federal consent decree. But according to Sawant, "Best has not carried out any significant reforms of the department."

Those newly hired officers would be the first to be fired under a "last in first out" policy because of the cuts. Sawant discounted: "Best was never a reformer. This is clear in her failure to fight for serious policy changes in the department, her consistent refusal to hold officers accountable, and perhaps most of all in her choice to retire now rather than to carry out the reforms demanded by the Black Lives Matter movement."

In her press conference Tuesday regarding her resignation, Best said "The council gave us $1.6 million to make sure we hire the best and the brightest and the most diverse and brought them on. And less than a year later, we're going to just turn them all away. It feels very duplicitous. I have my convictions. I cannot do that."

In her letter, Sawant was quick to criticize the tactics of SPD but failed to discuss the violence of the rioters constant pre-meditated and organized attacks on officers. Sawant herself led an occupation of city hall by activists in June. She used her key to the building to give the demonstrators access to the building in the middle of the night.

Sawant is always quick to jump on the latest "social justice" cause to push her own agenda. During the city hall occupation, demonstrators booed Sawant when she began using the event to push her own "Tax Amazon" intentions.

Sawant made her endgame very clear for abolishing the police while at the same time calling out Democrats, whose endorsement she sought in her re-election campaign.

"The pressure from the Black Lives Matter movement has led to many sweeping promises of reform by Democratic Party politicians, many of which they are now working hard to walk back. This has already happened in Minneapolis, where the Democratic City Council have abdicated promises of 'dismantling' the police department. And in Seattle, we saw how Mayor Durkan has remained hostile to defunding the police, and Democratic City Councilmembers completely failed to keep their public promises of 50 percent defunding in the Summer budget vote, and furthermore, approved an austerity budget after having promised an anti-austerity approach."

Of course, no Sawant rant would be complete without ripping the Trump Administration or "the right wing."

The radical concluded her rant with a promise to continue the fight, saying:

"Round two of the People's Budget will begin in September as the discussions begin on the 2021 budget. The pressure of a broad, multi-racial movement rooted in addressing the burning needs of working-class Black and Brown communities will be vital in whether we win a 50 percent defunding and far-reaching reforms of this racist police department, or whether the establishment succeeds in turning the tables against those reforms. This will be a crucial fight for all working people and the oppressed. The nation will be watching."