On Tuesday, Senator John Kennedy grilled Dr. Anthony Fauci and NIH Director Dr. Francis Collins on why they "spiked" the prior administration's investigation into the origins of COVID-19. 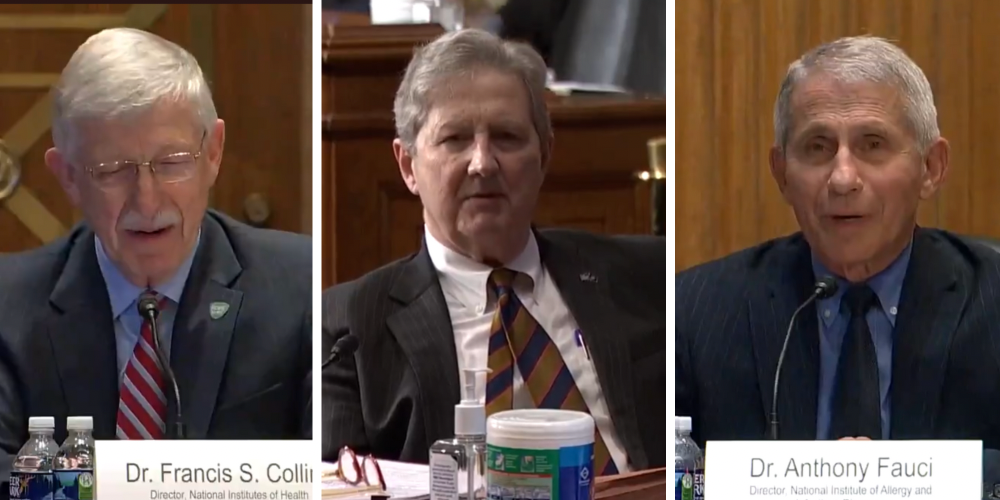 On Tuesday, Senator John Kennedy grilled Dr. Anthony Fauci and NIH Director Dr. Francis Collins on why they "spiked" the prior administration's investigation into the origins of COVID-19.

"Why did you all spike the prior administration's investigation into the origins of the coronavirus and whether it could have come out of the Wuhan lab?" Kennedy asked during a Senate Committee hearing on the NIH budget.

"Sir, we did not spike anything in the prior administration, I'm not sure what you mean by spike, but we have no influence," replied Fauci.

"The State Department spiked the prior administration's study," Kennedy replied.

"But that has nothing to do with the National Institutes of Health," stated Fauci.

"So they didn't consult with y'all?" Kennedy interrupted.

"They did not," Fauci said.

"Did they consult with you Dr. Collins?" Kennedy asked, to which Collins replied: "I read about it in the press this morning."

"Doc, they just spiked it without talking to the experts?" Kennedy asked, who was met with silence from both Fauci and Collins. "You don't want top answers that one do you."

Fauci said he "doesn't have enough insight" to say if Chinese scientists at the Wuhan Institute of Virology would have lied about where NIH funding was going or the origins of COVID-19, but added that Chinese scientists are "trustworthy," and that he would expect that "they would abide by the conditions of the grant."