Culture is truly confused if we think that corporate affirmation of our true selves is the kind of validation young people need. 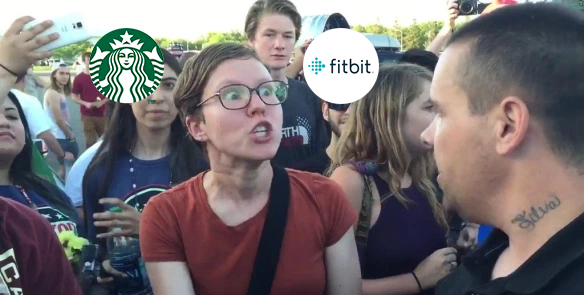 Corporate marketing execs clamour to catch the next big trend and run with it. They want to sell an image, a lifestyle, and look compassionate and caring while they do it. That’s what makes Fitbit’s latest move so surprising, and Starbucks’ approach so predictable.

Fitness tracker Fitbit’s failure to fabricate gender categories for nonbinary females using the “female health tracker” engendered a freakout from Twitter user Lilo the Autistic Queer. She wanted the app to facilitate period tracking but didn’t fancy claiming femaleness to do it.

While Lilo is AFAB, otherwise known as “assigned female at birth,” or, simply, female, they (per pronouns in bio) consider themselves non-binary, meaning that they do not subscribe to the application of stereotypes on their person. They would like Fitbit to make this change to accommodate them.

Although one of the Developer Advocates did get the message, and promised to pass the request to erase women along to the menstrual health team.

The gender-critical set pushed back, saying that women should not be eliminated from the concept of menstruation. After all, menstruation is a function of the female reproductive system, without which, there would be no menstruation. Fitbit is a fitness tracker that primarily appeals to females.

Fitbit will just be the latest corporate entity to get swept up into this fiction that biological sex doesn’t exist and that we can choose our own gender. But Fitbit should beware that simply acquiescing to the gender-based demands doesn’t result in smooth sailing along a sexless sea.

Starbucks has also jumped into the gender identity fray. They launched an ad that shows a young person who is called Jemma by everyone, much to this person’s dismay (pronouns were not disclosed in the ad), until Jemma walks into a Starbucks, orders a coffee, and is asked their name. When they reply James, it is with relief, the idea being that James is the true name, and Jemma is a lie.

The ad was roundly loved on trans twitter, with users sharing their first time using their new names at Starbucks, and the joy it gave them to be recognized by barista and coffee giant alike. The ad is part of a partnership with Mermaids, a U.K. organization that advocates for transing youth. In further support, Starbucks will be selling limited-edition mermaid cookies to raise money for the group.

Of course, Starbucks employees have their own quibbles with their corporate trans advocacy. Namely, that the ad is a dishonest representation of Starbucks actual actions with regard to trans on the employment side. Buzzfeed News reports that trans employees have trouble with obtaining gender affirming surgeries, using their chosen as opposed to legal name on employment and payroll records and being outed as trans.

One Starbucks barista took to Twitter to out the hypocrisy of the marketing team going all-in on trans while leaving the shift managers in the dust.

Starbucks gave trans inclusion a shot in media, even winning the Diversity in Advertising Award for 2019, but no matter how inclusive they strive to be, it won’t be enough. Fitbit didn’t even try, and the only difference is they didn’t win an award for it.

Culture is truly confused if we think that corporate affirmation of our true selves is the kind of validation young people need. The truth is that there is no salvation in corporate marketing. We should not be striving to have major multinationals giving us deep and meaningful insight into our true selves. The Madison Avenue ad men of yore didn’t know us. They were wrong when they told us what expectations of masculinity and femininity we needed to meet. And the marketing folx are wrong now, they don’t care about the kids, they just want to sell them stuff, and they don’t care how they do it, they just pretend they do.