Every once in a while, in a sea of negative news, something positive emerges – thanks to Constable Wendy Cormier of the Truro Police Service in Nova Scotia, yesterday was one of those days. 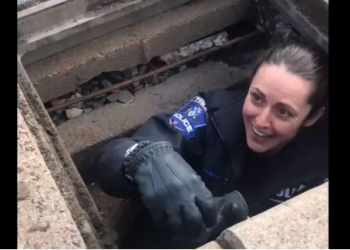 Every once in a while, in a sea of negative news, something positive emerges  – thanks to Constable Wendy Cormier of the Truro Police Service in Nova Scotia, yesterday was one of those days.

Cormier arrived on the scene upon responding to a call from a man who noticed a mother duck pacing around on the street, at risk of being run over.

The man heard some chirping from a nearby storm drain and soon enough they determined that the ducklings had fallen down the storm sewer.

“[After] a little further investigation he heard some chirping coming from the storm drain and he went over and saw them down there,” said Cormier to the CBC.

Fortunately, a public works employee was on the scene within minutes to  remove the storm drain’s lid so Cormier could hop down and retrieve the ducklings.

“I couldn’t get to the call fast enough, actually, to get them outta there,” said  a pleased Cormier. “I was the smallest one there, so I got picked to go down and fish them out.”

Cormier said she spotted the ducklings in a pipe between drains and with assistance from a public works employee, they rescued five ducklings

“Once we got them out it was almost like she [the mother duck] knew we had them and that they were safe,” said Cormier, who put the ducklings in a box.

“As soon as she noticed we had them out she started walking away, just basically wanted us to follow her.”

The mother duck led the way to the parking lot of a nearby restaurant.

“She stopped and just waited for us to put them down on the ground and we just set the box over on its side and little ducks came out of the box and right over to their mom,” said Cormier.

“It was a pretty good feel good story for Mother’s Day.”