When the former "Empire" actor came out with his claim – the progressive establishment bought it hook, line, and sinker. 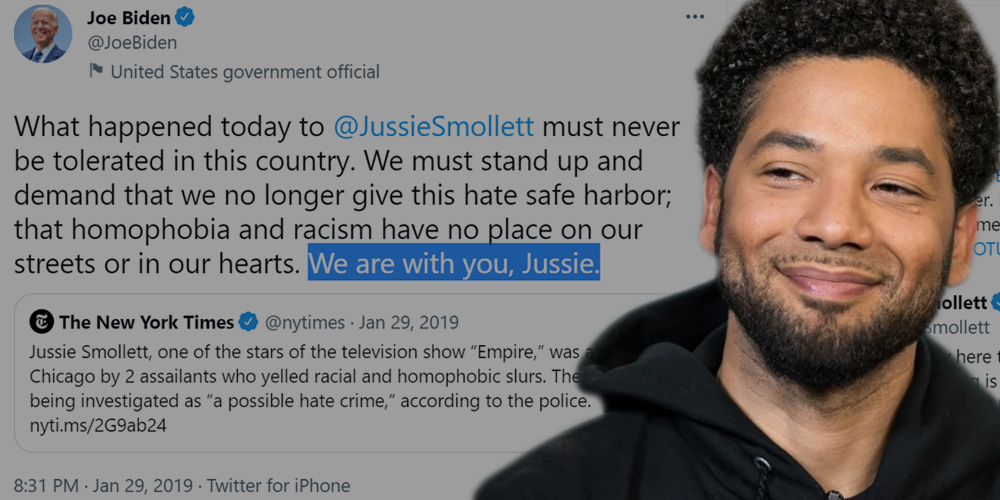 After a nearly two-week trial, former "Empire" actor Jussie Smollett was found guilty on five out of the six charges of disorderly conduct stemming from filing a false police report to Chicago Police about an alleged "hate crime" incident that he claimed took place back in January 2019.

On Thursday evening a jury decided that Smollett wasn’t telling the truth in saying that two "MAGA country" racists poured bleach on him and put a noose around his neck in earnest. Instead, the jury sided with the testimony of the Osundairo brothers who exposed the Jussie Smollett as a fraudulent act.

The entire cast of "The Big Bang Theory" did a photo-op in support of Jussie Smollett immediately following reports about the so-called hate crime attack.

"We must stand up and demand that we no longer give this hate safe harbor; that homophobia and racism have no place on our streets or in our hearts. We are with you, Jussie." – President Biden.

"This was an attempted modern day lynching. No one should have to fear for their life because of their sexuality or color of their skin. We must confront this hate." – Vice President Kamala Harris.

"The racist and homophobic attack on Jussie Smollett is a horrific instance of the surging hostility toward minorities around the country." -- Bernie Sanders

"This attack was not 'possibly homophobic.' It was a racist and homophobic attack." -- Alexandria Ocasio-Cortez

"What happened to Jussie Smollett is vile and tragic; thankfully, he will recover. But hate crimes like this are happening more frequently, egged on by careless hate-filled rhetoric." -- Eric Swalwell

"THIS is why the LGBTQ community continue to fight to be seen and PROTECTED against hate! We ALL have to take this racist and homophobic act of violence very personally!" -- Actress Viola Davis

"I am disgusted and horrified to hear of the homophobic and racial attack on Jussie Smollett last night. Unfortunately, these hateful attacks happen way too often." -- Mindy Kaling

"This is why so many of us just feel less safe in Black and Brown skin these days." -- MSNBC Political Commentator.

"This makes me so sick to my stomach today. Confirmed. Jussie Smollett, we are all with you!" -- Daniel Hernandez, LA Times.

"What happened to Jussie Smollett is another reminder that white supremacy thrives off of anti-Blackness and homophobia." – CiCi Adams, NBC.

"I am horrified to read of the racist and homophobic attack against Jussie Smollett. Sending love & light to Jussie." – Prasanna Ranganathan, HuffPost and CBC.

"What more evidence does @Chicago_Police need to call what happened to Jussie Smollett what it is - a hate crime?" -- Rashad Robinson, Color of Change

"This is what the Trump-Pence White House has enabled through their hateful rhetoric and actions." -- Charlotte Clymer

"The MAGA hat is the new white hood." -- Andy Herren

"No, the real damage was done to Jussie Smollett. We don't have enough information just yet, but racist and homophobic people who commit hate crimes don't typically tend to be Bernie supporters." – Ali A. Rizvi

"The guilty must face the maximum," wrote Al Sharpton.

The special prosecutor in the case told reporters that lying under oath will come up at Smollett’s sentencing hearing. He’s being kept on his recognizance bond but will have to come to Chicago in-person for his sentencing.