"Athletic teams or sports that are designated for females are open to females, and we're going off biology, not ideology when we're doing sports," said DeSantis. 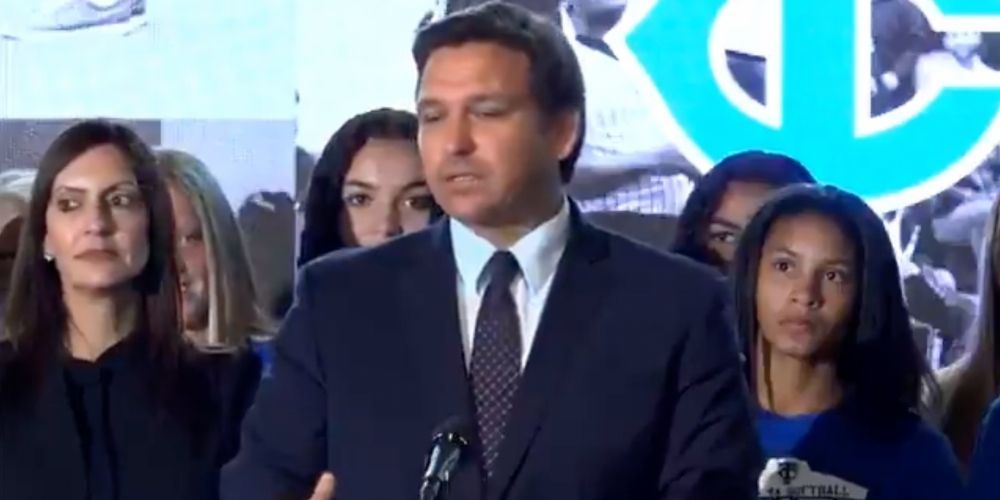 "We believe in the state of Florida of protecting the fairness and the integrity of women's athletics," said DeSantis.

DeSantis said that women's sports "provides our young girls with opportunities that really teach them lessons that last a lifetime," adding that competing in sports has provided many girls the opportunity to pursue higher education.

"We believe that it is very important that the integrity of those competitions are preserved. That these opportunities are protected." Said DeSantis.

"Athletic teams or sports that are designated for females are open to females, and we're going off biology, not ideology when we're doing sports," said DeSantis, talking on the language of the bill.

"The bill defines a student’s biological sex based on the student’s official birth certificate at the time of birth, and as part of the bill we're signing today, we're not only making sure that women have opportunities for scholarships and competition at the highest level, we're also putting in statute ways to actually vindicate the rights of any women athletes who may be discriminated against.

DeSantis went on to outline who can pursue what he called "civil remedies" in association with this bill.

DeSantis talked about other states where, for example, in track, girls train for years only to not be able to advance as a result of biological males competing in women’s sports. DeSantis invited Selina Soule, who was a Connecticut high school track runner who lost the opportunity to run in the New England Regional Championship because of biological males running in her division.

"I love my sport. I've spent countless hours training to shave fractions of a second off of my time so I could be the best. Because I race to win," said Soule. "But my chances of being first, of being the best, were shattered."

Soule went on to talk about the two female-identifying but biologically male students that were allowed to run in female divisions beginning in 2017. In three years, hose two athletes won 15 women's championship titles and set 17 individual meet records, "records which we girls had no hope in breaking."

She said it was "demoralizing" to be sidelined in her own sport, talking about how she, and other girls in the state, were denied countless opportunities because of those two athletes.

DeSantis also announced that he would be signing a separate bill the same day that would allow students to get compensation for the use of their name and likeness, effective July 1, 2021, despite the bill signed on video pushing the date off to 2022.