Crist, who has been a big critic of Governor Ron DeSantis, is sending two different messages about Pride Month with his website. 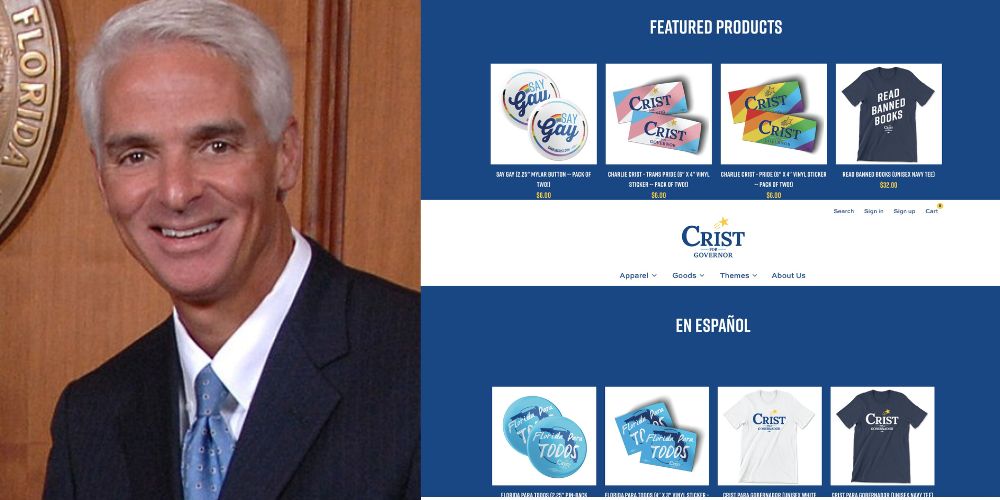 Democratic Congressman and Florida gubernatorial hopeful Charlie Crist's website features two distinct themes for its English and Spanish speaking audience. He's got plenty of Pride merch for the English language side of the site, but on the Spanish language side, no rainbow or trans flags are on display.

Media strategist Giancarlo Sopo pointed out the difference on Twitter today with some screen captures and wrote, "Interesting. When you visit Charlie Crist's campaign store, the English version prominently features Pride Month materials for sale. But the Spanish version has none."

Crist, who has been a big critic of Governor Ron DeSantis, is sending two different messages about Pride Month with his website.

Crist's hypocritical messaging is consistent with Left wing public facing on many issues but especially LGBTQ+ themes. The Post Millennial reported in June of last year about the popular trend of woke corporations prominently displaying LGBTQ+ materials to American audiences while quietly scrubbing their branding to consumers in places like the Middle East.

The dual messaging also implicitly acknowledges that Crist believes the Hispanic community is a more conservative body politically than the progressive intersectional left would hope.

Crist has a history of not committing to a consistent message. He was originally a Republican, even serving as a Republican governor of Florida in 2006, but then became an Independent in 2010 after losing to Marco Rubio in a Senate Primary.

Crist then started to identify as a Democrat after he came out in support of then President Barack Obama's reelection in 2012. Crist is currently polling roughly 16 points behind Governor DeSantis in the upcoming gubernatorial election.