“France does not belong to the French! Everyone has a right to be here!,” chanted a protestor over a megaphone. 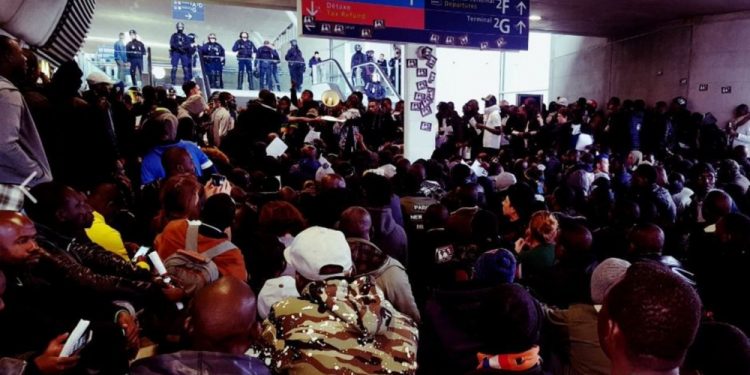 “France does not belong to the French! Everyone has a right to be here!,” chanted a protestor over a megaphone.

#Breaking: Just in – Reports that undocumented immigrants are protesting in the Charles de Gaulle Airport in #Paris right now and won’t let people board their flights until they meet and talk with with the prime minister Édouard Philippe of #France, Riot CRS police on the scene. pic.twitter.com/fextoWCs6S— Sotiri Dimpinoudis ?? (@sotiridi) May 19, 2019

The group which gathered to protest the treatment and deportation of migrants by the French government called to meet with the country’s Prime Minister Edouard Philippe.

The protest was organized by the “militant” group  La Chapelle Debout and they identified themselves as the “Black Vests.” The term was a likely play on the popular “Yellow Vest” uprising rocking the European nation.

Besides hoping to score a meeting with France’s Prime Minister, the group also called on Air France to  “stop any financial, material, logistical or political participation in deportations.”

According to local media, a number of representatives from Air France met with the group to hear their demands.

“We have targeted Air France, and other actions will follow,” claimed one protestor.